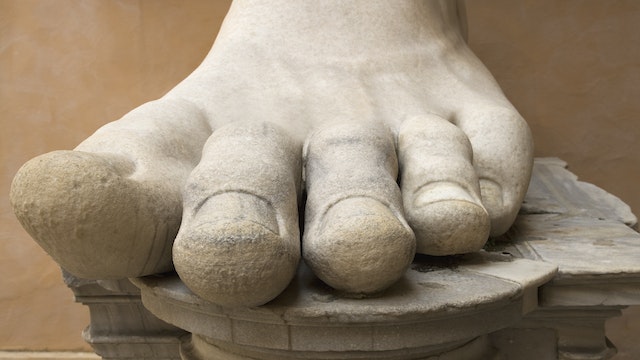 Dating from 1471, the Capitoline Museums are the world's oldest public museums. Their collection of classical sculpture is one of Italy's finest, boasting works such as the iconic Lupa Capitolina (Capitoline Wolf), a life-size bronze of a she-wolf suckling Romulus and Remus, and the Galata morente (Dying Gaul), a moving depiction of a dying warrior. There's also a formidable gallery with masterpieces by the likes of Titian, Tintoretto, Rubens and Caravaggio.

Ticket prices increase when there's a temporary exhibition on.

The museums' entrance is in Palazzo dei Conservatori, on the right as you come up the Cordonata staircase. Here you'll find the original core of the sculptural collection on the 1st floor and the Pinacoteca (picture gallery) on the 2nd floor.

Before you head upstairs, take a moment to admire the ancient masonry littered around the ground-floor courtyard, most notably a mammoth head, hand and foot. These all come from a 12m-high statue of Constantine that originally stood in the Basilica di Massenzio in the Roman Forum.

Of the sculpture on the 1st floor, the Etruscan Lupa Capitolina is the most famous. Donated to the Roman people by Pope Sixtus IV, the bronze wolf stands over her suckling wards, who were added in 1471. Until recently, the she-wolf was thought to be a 5th-century BC Etruscan work but carbon-dating has since shown it probably dates from the 1200s.

Other highlights include the Spinario, a delicate 1st-century-BC bronze of a boy removing a thorn from his foot, and two works by Gian Lorenzo Bernini: Medusa, and a statue of Pope Urban VIII in the frescoed Sala degli Orazi e Curiazi. Also on this floor, in the modern Esedra di Marco Aurelio, is the original of the equestrian statue of Marcus Aurelius that stands outside in Piazza del Campidoglio.

A tunnel links Palazzo dei Conservatori to Palazzo Nuovo on the other side of the square via the Tabularium, ancient Rome's central archive, beneath Palazzo Senatorio.

Palazzo Nuovo contains some real showstoppers. Chief among them is the Galata morente, a Roman copy of a 3rd-century-BC Greek original that touchingly depicts the anguish of a dying Gaul warrior. Another superb figurative piece is the Venere Capitolina (Capitoline Venus), a sensual yet demure portrayal of the nude goddess.