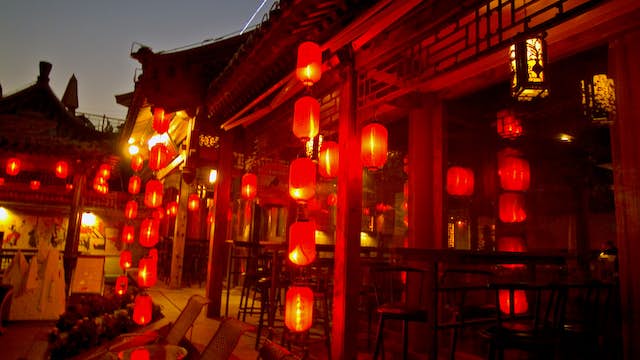 Dedicated to the Eastern Peak (Tài Shān) of China’s five Taoist mountains, this morbid Taoist shrine is an unsettling, albeit entertaining, place of worship. The highlight is the series of comically macabre diorama cubicles representing various 'departments' from the Taoist underworld.

A temple has stood on this spot for over 700 years since the Mongol-led Yuan dynasty, but these days it's almost lost in the sprawl. Note the fabulous páifāng (memorial archway) to the south, divided from the main shrine by the busy main road.

Other parts of the temple are no less fascinating. The cavernous Daiyue Hall (Dàiyuè Diàn) is consecrated to the God of Taishan, who sits inside, managing the 18 layers of hell. Visit during festival time, especially during the Chinese New Year and the Mid-Autumn Festival, and you’ll see the temple at its most vibrant.

Just outside the complex, in a small car park to the east, stands the handsome, but rather lonely Jiǔtiān Pǔhuā Gōng, a small temple hall, which is the only remaining structure of two other Taoist temples that once also stood in this area.