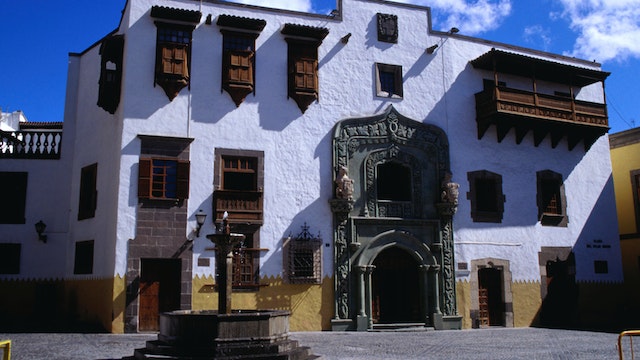 This fascinating museum documents Columbus’ voyages and features exhibits on the Canary Islands’ historical role as a staging post for transatlantic shipping. Don’t miss the large section of model galleons ('La Niña') on the ground floor, which particularly impresses children with its working detail. The crucifix is said to have come from Columbus' ship. In the next room are models of all three of Columbus' ships: La Niña, La Pinta and the Santa María.

Rooms five and six contain historical maps and facsimiles of ancient maps, many from the early 16th century. Look out for the facsimile of the 'Universalis Cosmographia' map by the German cartographer Martin Waldseemüller, which was conceived in 1507 and is staggeringly accurate for its time. Astrolabes are also on display.

A large collection of artwork dwells upstairs, as well as a diorama of old Las Palmas with buttons for illuminating specific buildings and edifices. After descending the long stairs into the basement you are rewarded with displays on ancient South American pottery and history.

The building is a superb example of Canarian architecture, built around two lovely balconied patios, complete with fountains, palm trees and colourful macaws (the last make for excellent photo ops, but watch out, they can peck). The exterior is a work of art itself, with some showy plateresque (silversmith-like) elements, combined with traditional heavy wooden balconies.

Although called Columbus’ House (it’s possible he stopped here in 1492), most of what you see dates from the time this building was the opulent residence of Las Palmas’ early governors.

Check the website for details on free-entry days, including the first weekend of each month.