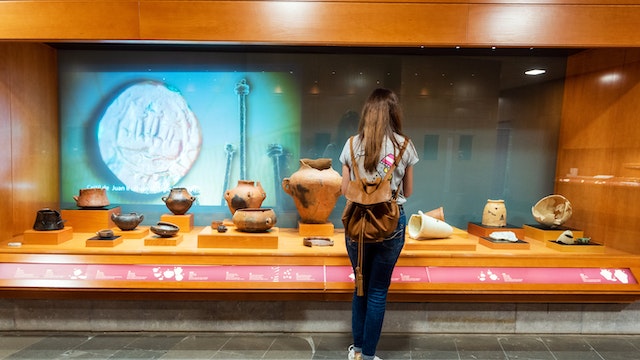 Discovered by a local farmer in the late 19th century, this is one of Gran Canaria's most important pre-Hispanic archaeological sites: a cave adorned with geometric shapes, possibly thought to relate to the lunar and solar calendars (though this is debated). It's also the most accessible of the island's archaeological sites, situated not halfway up a cliff but right in the heart of town (it is wheelchair-friendly also). The highlight is the cave itself, fully explained on the tour.

The museum complex features videos and reconstructions shedding light onto local life before the conquistadors arrived, and showcases the 5000-sq-metre excavated site where the remains of cave houses have been dug out from the volcanic rock (around which you can walk). Videos in various languages offer pointers about the history of the site, but you will need to tag along on the 90-minute tour (in Spanish, English, French and German) to see the painted cave itself from within the confines of a glass room and to be in a position to ask questions. The colours and triangular shapes and patterns on the wall have deteriorated considerably but are still clear enough to admire. Try to book in advance via the website or over the phone – there is a limit of 20 people on each tour so you might be disappointed if you just show up.

In order to prevent further deterioration to the paintings, the cave is open at numerous set times and viewing periods can be brief. In the decade after 1972 the colours of the pigments were reduced by a shocking 50% due to the constant stream of visitors (just the effects of human breath were enough to do considerable damage, hence the enclosed viewing experience).

After seeing the wall paintings, you can explore the interiors of some recreated dwellings, strewn with animal skins.

A combination €6 ticket is available that includes the Casa Museo Antonio Padrón, and the Casa-Museo Tomás Morales in Moya.