How to survive a boring road trip

'But I wanna be there NOWWWWW!'

The above might sound like a small child’s back seat complaints, but it’s actually a sampling of my running commentary from the first 20 minutes of a recent, epic 4.5 hour road trip. Epic by my standards.

I hate road trips. I hate being in cars, even as a passenger. Even if I’m asleep, which is almost impossible because, based on non-jealous personal observation of friends and acquaintances, only mental defectives can sleep in moving cars. Clearly, barring permanent relocation to Liechtenstein, I can’t go on like this. So, I began pulling together tips on how I might make road trips tolerable – or even actually enjoyable.

There’s the old standbys: uplifting music, podcasts and audio books, roadside attractions, Meatloaf sing-alongs, and punching your sibling, but let’s think outside the box, shall we? I started by talking to some hardcore road-trippers with some serious boredom fighting under their belts.

In 2011, travel blogger Sherry Ott participated in the Mongol Rally, an ass-flattening 9,000 mile drive from London to Ulaanbaatar, Mongolia. The challenge was heightened significantly by the fact that she was driving in a tiny 2002 Nissan Almera with three other people who were effectively strangers before the trip began.

On weeks-long road trips like this, distractions and recuperative breaks need to be equally large. 'We curbed boredom and lack of physical activity by picking certain cities to spend a day in and take part in active tours such as a bike tour of the city so that we got some exercise. There’s nothing worse than sitting in a car all day for 5 weeks to make your muscles go into atrophy,' Ott explained.

For shorter stops, Ott’s team engaged in multiple rejuvenating activities. “We asked locals for directions while at gas stations, stop lights, and parking lots; it's a great way to slow down and meet people while you are on the road instead of blindly following GPS. We tried every potato chip flavor there was at gas stations. I preferred the beef flavored chip to the caviar chip for sure!”

For in-car distractions, Sherry’s team shared a book, passed around the back seat between the day’s non-drivers. 'That way we all could discuss it since we were all reading it at the same pace.' Then, there were the unintentional diversions. 'One day we entertained ourselves by stopping the car and fixing it every 30 minutes. Ahhh - fun times.'

Though much longer, travel writer Paul Brady’s 10-week, 30-state drive around the US in 2011 seems comparatively sane in that most of it was conducted in English, on paved roads and without multiple protracted border crossings.

Brady’s top tip: 'Buy a satellite radio and listen to the weird stations: trucking, esoteric sports talk, whatever music you think you don't like, etc.'

Like Sherry, Paul wasn’t afraid to take frequent, indulgent stops. 'Don't pass the gas station. They are really fun if you slow down and talk to folks (staff and customers) and really stretch your legs. There's an enormous difference in the refreshment you feel between just stopping for gas and stopping for gas and walking around for five minutes.'

In addition to these suggestions, I drew on the terrible power of social media and the even terribler power of my brain and we came up with the following list of road trip boredom repellents:

What diversions do you use to ease the boredom of long road trips?

Leif Pettersen is a Lonely Planet author, freelance travel writer and polyglot. He’s visited 47 countries (so far) and can be found @leifpettersen.

The other New Orleans soundtrack 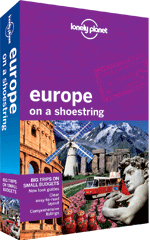 How to travel in Europe