If coffee has a spiritual home, Italy is it.

The Italians pretty much invented the way the rest of the world confects, serves and drinks coffee, from the lingo (cappuccino, latte, macchiato) to the steam-driven espresso machine (first pioneered by Angelo Moriondo in Turin in 1884), to the stylish brands (Illy and Lavazza).

Foreign attempts to adapt and embellish coffee with milkshakes and frappuccinos are treated as a form of sacrilege in Italy, where cafes remain fiercely traditional. Many international chains have yet to open a franchise here, while independently run cafes staffed by ultra-professional baristas are the rule rather than the exception.

Some establishments even date back to the early 18th century. The Caffè Fiorio in Turin once slammed down cuppas for Nietzsche and the Count of Cavour. Cosenza’s gilded Gran Caffè Renzelli has been run by the same family since 1803.

Don't ask for an espresso in Italy

Think of your first Italian coffee order as an unofficial initiation ceremony. Rule number one: don’t ask for a large double-shot skinny vanilla latte with whipped cream on top. Most Italian coffee orders can be made by uttering a single word. A caffè is a strong shot of espresso (the term ‘espresso’ is rarely used in Italian coffee bar parlance). A macchiato is an espresso with a dash of steamed milk. An americano is an espresso with added hot water making for a slightly longer drink. The king of all white coffees is the revered cappuccino, an espresso topped with warm frothy milk with an optional sprinkling of chocolate.

There are no size differentials in Italy. Requests for a grande or a venti will be met with looks of confusion or mirth. The standard cappuccino comes in a 180ml porcelain cup and should be warm rather than boiling hot. Low-fat milk is rarely available, although you might get luckier asking for a decaf. Take care when ordering lattes. The word latte means milk in Italian; order one and that’s what you’ll get. A caffè latte is a glass of warm milk with a tiny droplet of coffee in it.

The best time to order a cappuccino

Noticeably absent from the Italian coffee scene is the notion of the ‘take-away’. Except in train stations, cafes rarely stock disposable take-out cups. Hurry or no hurry, you’ll be expected to prop up the bar with the locals, or – for a slight premium – perch at a tiny table. Italians aren’t accustomed to hanging around in cafes for hours. A coffee break is known as ‘una pausa’ (a pause) and that is quite literally what it is. Take a few bites from a flaky pastry, neck your boiling hot espresso (three gulps maximum), pontificate about the latest corruption scandal with the barista, and be on your way.

Traditionally, cappuccini are taken in the morning. Some cynics suggest that it’s a massive faux pas to order a cappuccino after 10am but, while it’s unlikely that your Italian amici will be sticking milk in their coffee after dinner, late-night cappuccino-drinking is not – as yet – an illegal activity. Just make sure you apologise first.

The taste of Italian coffee

One of the best things about Italian coffee is that, no matter where you are – an obscure mountain village or a cheek-by-jowl Rome piazza – the quality is consistent. As much as Italians like their pasta al dente, they like their coffee to have a heavily roasted, bittersweet flavour with a brown foam or crema on top.

Smooth, fruity taste notes and fancy latte art are anathemas to most Italians. The absence of foreign chains is mirrored by the absence of any third-wave hipster coffee bars. No one is willing to wait ten minutes for a barista to prepare a personalised ‘pour-over’ or graft a maple leaf on top of their cappuccino. Indeed, the speed that Italian baristas operate during the breakfast rush is a sight to behold.

Although simple is generally best in the Italian culinary world, coffee culture allows room for a few minor variations, some of them regional. A caffè corretto is an espresso ‘corrected’ with a slug of liquor, usually grappa, and is taken later in the day. A doppio is a double espresso, perfectly acceptable if you’re hungover or sleep-deprived. A ristretto is a short espresso with less water but equal potency. A cappuccino scuro is a cappuccino made with less milk.

The bicerin is a speciality of the Piedmont region, particularly Turin, and has been around for at least 200 years. It consists of layered espresso, hot chocolate and milk and is served in a glass. Not dissimilar is the marocchino, another Piedmontese invention, a mix of espresso, cocoa powder and milk froth. If you’re imbibing with your kids in tow, order them a cioccolata calda (hot chocolate) which, in the true spirit of la dolce vita, is dark, dense and delicious.

How Italians drink their coffee

- In bars, coffee is often served with a small glass of water; the water is supposed to be drunk first to cleanse the palate.
- In some busy bars (especially train stations), you must pay for your coffee upfront at a till and then present your receipt to the barista.
- Italians drink coffee regularly in small amounts. Seven or eight espressos a day isn’t unheard of.
- Coffee in Italy is refreshingly cheap; if you’re paying more than €2 you’re being ripped off.
- Italy’s best coffee city is a debate that could restart the Risorgimento, but you’d be pushed to find a better stash of historic cafes than those in Turin (home of Lavazza) or Trieste (home of Illy).

How to order coffee in Italy

Italy's best dishes and where to try them
Where to find your favourite pasta shapes
Eat Italy: learn about Italian food culture with this Lonely Planet's book 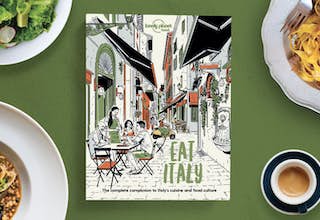