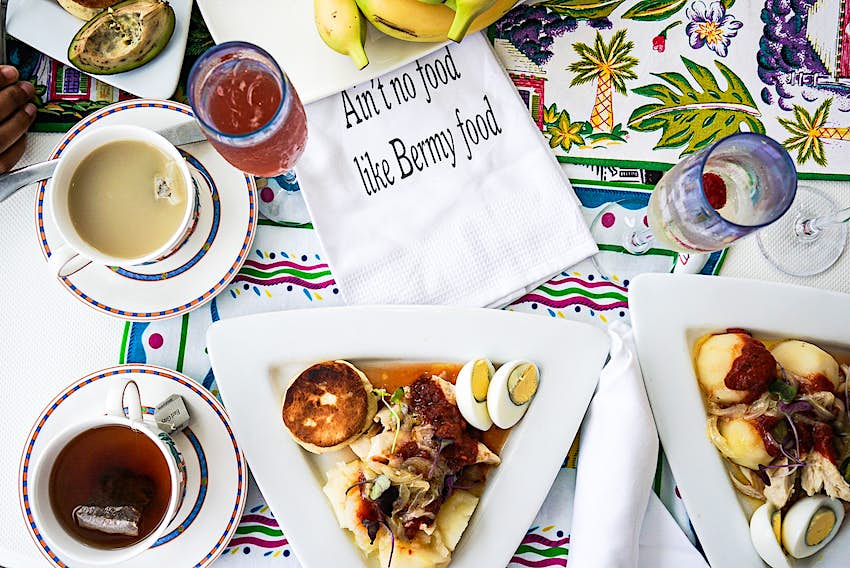 During these quiet, still days of hunkering down at home versus traveling, fumbling through my pantry is like taking an adventure through the past. Whether it’s the flaky sea salt from Western Island, mini bottles of Marie Sharp's Belizean hot sauce or glass jarred bottles of tangy dijon mustard from France, I remember where I’ve been, where I’ve traveled and the places that changed me, all through my senses.

The tingle of peppery aromas filling the air causing my nose to sniffle, the feel of a new-to-me dish thrashing against my tongue and tastebuds, the sounds of bodies moving with fluidity within a kitchen within earshot as I wait for the big reveal of what I'm about to eat – some memories are more alive than others, and some dishes instantly take me back to a place and a moment in time.

I was celebrating another year of life, wistfully, in Guatemala City last May. With the intent of blocking out the noise from my work life, I had an out-of-office auto-responder on my email. The way I chose to greet this new year of life I’d been gifted, the miracle that was me still breathing, was to eat as much as possible.

I started off the birthday morning with a cappuccino and a strawberry cinnamon roll from Fado Bakery that had wooden stalls full of pastries to choose from. In my shoddy, shy Spanish, I rattled off my order and ate it on a wooden stool that hurt to sit in, swatting the scores of flies that had appeared. Down the street, I ate duck confit for lunch – the duck was juicy, but regrettably under-seasoned, and the mashed potatoes too gummy to be savored. Then I had an hours-long siesta until it was dark outside.

Dinner was the pinnacle of the day – I methodically researched and found a restaurant helmed by a woman of Maya descent called La Cocina de Señora Pu. In a former professional life she was an anthropologist, studying, writing and researching about the Maya historical connections in Guatemala. This woman, Señora Pu, cooked in a teeny kitchen, a wood-burning stove directly behind the counter table space that fit no more than five people. I sat there after quietly telling her hello. For hours I feasted on grilled beef and shrimp doused in a fragrant red sauce and plated on a banana leaf. She accepted cash only, which I did not have. One of the waiters walked me to a nearby ATM and with a gentle wave wished me well, then walked off.

Mountains and lakes are my personal preference, but despite that the beauty of Bermuda still spoke to me. On a Saturday morning during my time there last year, I took a cruise. I joined a group of journalists departing from Darrell’s Wharf in Warwick. The smell of the sea lapping around the boat as we cruised around the island is still on my mind. As we cruised, with soca music blaring from the boat's speakers, we ate a traditional codfish breakfast. And later when we were back on dry land, we set off on a food tour.

We stopped for cupcakes, and then a massive fish sandwich so gargantuan I only took a few bites. Next was my personal favorite – Baxters. The place was housed in a nondescript building outfitted with only a white wrought-iron door. Inside was a carryout restaurant featuring the island’s most talked about pot pies. But these were no frozen Marie Callender or Swanson’s pot pies.

The dough, the crust, the filling – all of it was homemade. You could tell from the flakiness and butter oozing from each layer, whether you'd chosen the mussels, chicken, vegetable, beef or fish filling. Topping these pies with plenty of sweet relish, hot sauce and mayonnaise was key, I learned. Though I frowned when this was suggested to me, by the time I had eaten all of my curry mussels pot pie until there was nothing left, I had no protests.

Lagos, the ancestral homeland of my father and countless generations before him, is a place that sticks with you. There’s the heat and humidity that hangs over your body like an invisible veil. The noise and constant activity that can be draining to juggle for days on end. Traffic – the worst I’ve ever encountered – makes any trek, even short ones, a minimum of two hours.

I’d been in Lagos for a few days when two of my cousins decided to get suya. Suya was a great unknown to me — I’d only heard in passing how delicious it was and how it was a savored street snack in Lagos. After all, suya is merely meat cooked on an open flame, dusted with a smattering of spices that includes crushed peanuts, and served with cut red onions.

One of my cousins told the Uber driver where to go as I sat in the back seat. We ended up at Glover Court in Ikoyi where a crowd of men gathered in front of a red hut. From a distance, I saw a swirling of arms in coordination. Slicing and dicing the onions, cutting the meat, showering the meat with the spice blend before it hit the hot grill. And the heat, the heat from the fire ballooning in gusts every few moments as the wind carried the heat around the small hut.

When we left, my cousins held the suya wrapped in newspaper like a heralded prize waiting to be claimed. That we did, as we feasted on the meat, our hands muddled with spices and our lips blistering from its heat.

Though the noise from countless conversations going on around me was loud, the sound of water bursting through the front of the Trevi Fountain acted as a muting buffer. I was in Rome and my right hand cradled a cheeseburger from McDonald’s, trying to discreetly unwrap it from the crinkly wrapping paper. Darkness had settled over the area as did the cold air. After a heavy writing day, I’d been convinced to prowl the streets of Rome for a bowl of pasta alle vongole, or spaghetti with clams, with a new friend I’d made in the hostel I was staying in.

We eventually found a white tablecloth place with reasonable prices, despite how fancy it looked on the inside. I ordered the spaghetti with clams. She ordered something else. We laughed, drank glasses of wine and talked about bad dates. I felt my heart shift in a way that it only can when you’ve met someone genuine. Someone kind. Someone you want to stick around for awhile and not merely be a fleeting face you met while out experiencing the world.

Four days later, I woke up and her bed in the hostel across from me was empty, leaving behind only her crumpled sheets rolled into a ball. The next morning, I left, too. Every so often, I have a hankering for that same dish – al dente linguine noodles, briny clams swimming in a pungent garlic, butter and wine sauce dotted with parsley. I crave it. But really, it’s less of the food and more of the feeling. The company. The knowing that a moment crystallized in time made you feel alive and like the leap to go somewhere new would lead to something beautiful.

And then it does.

These books by African authors will transport you from Algeria to Zimbabwe
As Italy's famed restaurants reopen, here's what dining out is like
12 types of bread from around the world

5 min read • Published about 11 hours ago