14 top things to do in Tokyo, from sushi to kabuki

Toyko is the megacity that other world capitals look up to. Nowhere else has quite the same mix of timeless history and space-age tech, of strict tradition and up-to-the-second fashions, of bewildering crowds and moments of utter serenity. It's the past and future wrapped up together into one thrilling package – and understandably, it's one of the top tourist destinations on the planet.

Deciding what to do in a city as vast and complex as Tokyo can take some consideration. You can spend your days shopping for next-century electronics in futuristic malls or finding inner peace in timeless temples and serene zen gardens, and your evenings sipping sake in back-alley bars or clubbing with the cosplay set dressed up as a manga superhero.

A lot depends on how much time you have and how comfortable you are diving into Tokyo's complex but efficient public transport system. But if you want to maximize the experience on your first trip to Tokyo, here are 14 of our favorite things to do.

One of Asia's most iconic megacities, Tokyo only became the capital of Japan in 1868, when the country's rulers decided to abandon centuries of conservative tradition and embrace the outside world. Since then, Tokyo has looked firmly to the future, but the city still has a deeply traditional heart, best experienced through traditional arts and artforms.

For a sample of traditional Tokyo, watch kabuki (theatrical dance) at the Kabuki-za theater in Ginza, eat a traditional multi-course kaiseki meal to a backdrop of performing geisha in Asakusa, or admire one of the 7000-plus Japanese treasures on show at the Edo-Tokyo Museum. Irrespective of how you embrace them, the traditional arts are a great introduction to how Tokyo used to be before the city fell in love with everything modern.

If you’re on the hunt for old-school video game treasures, peruse the bountiful shelves of Retro Game Camp and Super Potato Retro-kan. However, you don't need to love manga or anime to enjoy this quirky neighborhood. With its neon-bright electronics stores, retro arcades, cosplay cafes – and now the chance to drive go-karts through the streets – it's equal parts sensory overload, cultural immersion and just plain fun.

Bestowed with the honorary title of ‘Japan’s Kitchen,’ Tsukiji was formerly the location of the city's most famous fish market, but the bulk of the wholesale fish-selling shifted to Toyosu Market on Tokyo Bay in 2018. Nevertheless, there's still plenty of action at Tsukiji, where the outer market area remains much as it was in the early Showa Period, when the market was founded.

The cramped alleyways are permeated by the saline smells of the Pacific. A rainbow menagerie of sea creatures decorates the stalls from top to bottom daily, and octogenarian fishmongers hail passersby with promises of culinary delights. The fist-sized seared scallops, tamagoyaki (rolled omelet) and uni (sea urchin) sushi at Tsukiji are must-eats.

Over at Toyosu, the largest seafood market in the world conducts its business inside huge ventilated hangars in Koto Ward. Built as a state-of-the-art upgrade to Tsukiji, it lacks the rustic charm of its predecessor, functioning more as an efficient trading floor for the seafood that keeps Tokyo's restaurants in business. However, it’s now home to Tokyo’s legendary morning tuna auctions – a great addition to any itinerary for early risers.

Modern art collective, teamLab, have made Tokyo the focal point for their ultratechnologist experiments in art and modern media. The best place to engage with their digital creativity is the group's Borderless exhibition in Tokyo’s Odaiba district, a procession of warehouse-sized artworks and dynamic light projections connected via tunnels in a 107,639 sq ft (10,000 sq meter) event space.

Weaving together several fantastical worlds, this futuristic art experience is surprisingly delightful and makes for some great photos. Digital art is trending all over Tokyo, and you'll see it worked into many other attractions around the city. Borderless is popular so book tickets in advance.

Join the shopping legions in Harajuku

The tree-lined avenue of Omote-sandō is famed for blending modern Japanese aesthetic preferences with Western hipster trends. This vibrant thoroughfare, lined with Zelkova trees, is dominated by high-end boutiques from Emporio Armani to Gucci, housed behind jarringly creative architectural facades. The Tokyu Plaza, with its fractal mirrored entrance, is particularly prepossessing.

The backstreets of Harajuku are Tokyo's street-fashion laboratory; this is where you'll find the trendsetters, the peacocks and the style photographers who chronicle it all – and the vintage clothing stores staffed by resident bohemians that keep everything moving. Keeping in line with the hipster theme, hit up Commune 2nd for lunch, a large outdoor canopy surrounded by food trucks serving such favorite Japanese street bites as karaage (battered chicken thighs) and tebasaki (fried wings), alongside vegan cuisine and craft beer stalls.

Sumo, one of the most enduring elements of Japan’s spiritual culture, originated in the early Nara Period (CE 710–794), when bouts between wrestlers were conceptualized as a way to entertain the Shinto gods. Although sumo is undeniably a sport in the modern age, much of the religious pageantry lives on: the salting of the pre-bout ring, the almost ascetic dedication of wrestlers, and the reverential regard in which yokozuna (grand champions) are held.

Sumo has six live annual events, three of which take place in Tokyo’s Ryōgoku Kokugikan in January, May and September. Tickets often sell out well in advance, so be sure to keep your eye on the official website for ticket release dates. If you’re lucky enough to nab one, mentally prepare yourself for a liquid lunch of rice wine, impassioned crowd support and highly audible slaps of belly on belly.

Washoku (traditional Japanese cuisine) was designated an intangible element of cultural heritage by Unesco in 2013, and Tokyo is its standard-bearer. More than 200 Michelin stars have been awarded to restaurants across the capital, ranging from simple ramen shops where a bowl of soup costs less than an hourly wage, to 11-course haute cuisine menus that will burn a fairly sizeable hole in your retirement fund.

For raw fish, beg your hotel concierge for a seat at the elegantly simplistic Sushi Saito (but don't be surprised if you get passed over for a local VIP). Ramen-lovers should slurp stone-milled noodles topped with truffle oil at Tsuta in Sugamo, while modern fine dining is typified by Florilège, a double Michelin-starred French-Japanese fusion where tasting menus are prepped in the culinary theater of an open kitchen.

Yokocho (alleyways) are as much a part of Tokyo’s culture as they are of its urban design. Shinjuku’s Golden Gai is the most popular yokocho zone, with 250-plus ramshackle pubs crammed into an area the size of a football field (including a vibrant collection of LGBTQIA+ dance bars). Nomiya Yokocho is a less-touristy option in off-beat Kita-Senju, with a new wave of foreign restaurants joining the charmingly claustrophobic chaos of its traditional bars.

Alternatively, check out Kichijoji’s Harmonica Alley, a network of corridors filled with the crackle of dripping meat skewers on open grills, cheap-as-chips standing bars pouring draft glasses of Asahi, and hole-in-the-wall snack joints. Expect to find a karaoke parlor or two nearby where you can finish the evening at full volume.

Marvel at the crowds at Shibuya Crossing

This is the Tokyo you’ve dreamed about and seen in movies: the frenetic pace, the mind-boggling crowds, the glowing lights and the giant video screens beaming larger-than-life celebrities over the streets. At Shibuya’s famous 'scramble' crossing, all of this comes together every time the lights change, and it’s an awesome sight. Come during the day to get the perfect overhead shot from a nearby rooftop, or on a Friday or Saturday night when you'll find the volume turned up to 11.

Find your calm in the gardens of Rikugi-en

Powerful daimyo (feudal lords) ruled much of Japan from the 10th to the 19th centuries, but in Tokyo – a city stricken over the centuries by rampaging fires, earth-shattering quakes, bombing raids and poor upkeep of traditional architecture – few visible remnants of their influence remains. But where you can find it, the old Tokyo still exudes a powerful magic.

Designed by Yanagisawa Yoshiyasu, lord of the Kawagoe estate, around the turn of the 17th century, the Rikugi-en garden in Bunkyo Ward is a bucolic splotch of green amid the turgid bustle of urban Tokyo. Mossy footpaths, waka poetry-inspired spiritual masonry, mirror-like ponds and cobblestone bridges are joined by shifting autumn foliage, and a resplendent weeping cherry tree in spring. Come and step back through a few centuries.

Engage with Japanese spirituality in Sensō-ji

The spiritual home of Tokyo's ancestors, the Buddhist temple of Sensō-ji was founded more than 1000 years before the city got its official start. While engulfed by the city today, it retains an alluring, timeless atmosphere redolent of the height of the Edo period and the mercantile bustle that defined Tokyo's golden age. The colorful Nakamise-dōri arcade approaching the temple complex overflows with vendors selling snacks and souvenirs.

The main plaza holds a five-story pagoda, renovated in 2017, and a giant cauldron of incense, kept constantly smoking by the crowds of visitors who throng the compound daily, particularly at weekends. Altogether, Sensō-ji is a heady mix of the secular and sacred, and one of Tokyo's most iconic sights.

Observe the cherry blossom in Yoyogi-kōen

Come spring, thousands of cherry trees around the city burst into white and pink flowers, ushering in the season for hanami (cherry blossom viewing). If Tokyoites have one moment to let their hair down en masse, this is it. Locals gather in parks and along river banks in huge numbers for sake-fuelled cherry-blossom-viewing parties under a canopy of pink and white flowers.

Grassy Yoyogi-kōen, one of the city's largest parks, is where you'll find some of the most spirited and elaborate bacchanals – complete with barbecues, sake-sipping and DJ turntables. Many revelers stay long after dark for the spectacle of yozakura (illuminated blossoms at night).

Immerse yourself in a cartoon world at the Ghibli Museum

Even those unfamiliar with the magical world of master animator Miyazaki Hayao – creator of anime (Japanese animation) classics including Princess Mononoke and Spirited Away – will find this museum enchanting. Fans just won't want to leave. Miyazaki designed the space himself and, like his films, it's filled with whirring steampunk-esque machines and fairy-tale structures.

While you won't see staff cosplaying (costume playing) any characters, many famous Ghibli characters have been cleverly worked into the fabric of the museum. Walking around really does feel a bit like falling into the fantasy worlds created by Miyazaki Hayao.

Discover the secrets of Shinto at Meiji-jingū

Tokyo’s largest and most famous Shintō shrine feels a world away from the bustle of the modern city. It’s reached via a long, rambling forest path marked by towering torii (entrance gates), and its grounds are vast, enveloping a series of wooden shrine buildings and landscaped gardens in a thick coat of green.

Meiji-jingū is a place of worship and a memorial to Emperor Meiji, and it’s also a place for traditional festivals and rituals, where weddings are held and milestones are celebrated – something you might catch if you time your visit right.

This article was first published April 2020 and updated June 2022 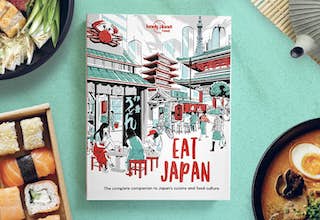 To help you feel prepared for the Japanese food scene we'll cover how, when and where to eat, etiquette dos and don'ts, and what classic regional specialties are a must try. You'll find the best places to eat in every region as well as what to order when you're there and how to eat it.