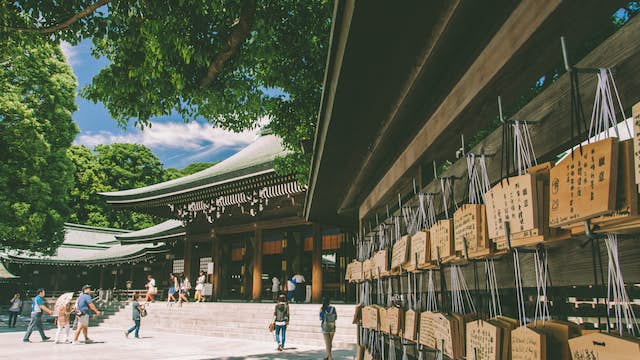 Tokyo’s grandest Shintō shrine is dedicated to the Emperor Meiji and Empress Shōken, whose reign (1868–1912) coincided with Japan's transformation from isolationist, feudal state to modern nation. Constructed in 1920, the shrine was destroyed in WWII air raids and rebuilt in 1958; however, unlike so many of Japan’s postwar reconstructions, Meiji-jingū has atmosphere in spades. Note that the shrine is currently undergoing renovations bit by bit in preparation for its 100th anniversary, but will remain open.

The main shrine, built of unpainted cypress wood with a copper-plated roof, is in a wooded grove accessed via a long winding gravel path. At the start of the path you'll pass through the first of several towering wooden torii (entrance gates). Just before the final torii is the temizuya (font), where visitors purify themselves by pouring water over their hands (purity is a tenet of Shintoism).

To make an offering at the main shrine, toss a ¥5 coin in the box, bow twice, clap your hands twice and then bow again. Nearby there are kiosks selling ema (wooden plaques on which prayers are written) and omamori (charms).

The shrine itself occupies only a small fraction of the sprawling forested grounds, which contain some 120,000 trees collected from all over Japan. Of this, only the strolling garden Meiji-jingū Gyoen is accessible to the public. The Meiji emperor himself designed the iris garden here to please the empress and the garden is most impressive when the irises bloom in June.