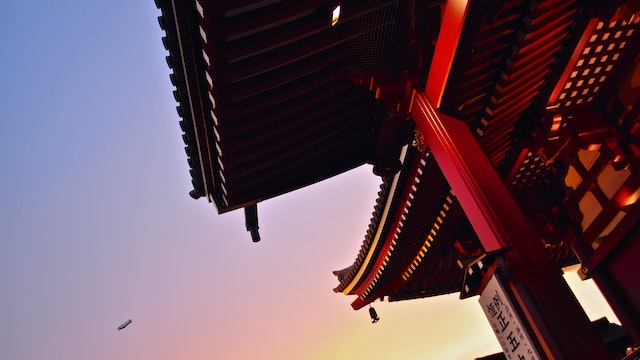 Tokyo’s most visited temple enshrines a golden image of Kannon (the Buddhist goddess of mercy), which, according to legend, was miraculously pulled out of the nearby Sumida-gawa by two fishermen in AD 628. The image has remained on the spot ever since but is never on public display. The present structure dates from 1958.

Sensō-ji is always busy, particularly on weekends; consider visiting in the evening to see it with fewer people and the buildings beautifully illuminated.

The main entrance to the temple complex is via the fantastic, red Kaminari-mon and busy shopping street Nakamise-dōri. Before passing through the gate, look to either side to see statues of Fūjin (the god of wind) and Raijin (the god of thunder), and under the giant red lantern to see a beautiful carved dragon.

Stalls along Nakamise-dōri sell everything from tourist trinkets to genuine Edo-style crafts. At the end of Nakamise-dōri is the temple itself, and to your left you’ll spot the 55m-high Five-Storey Pagoda. The 1973 reconstruction of a pagoda built by Tokugawa Iemitsu was renovated in 2017.

It’s a mystery as to whether or not the ancient image of Kannon actually exists, as it’s not on public display. This doesn’t stop a steady stream of worshippers from visiting. In front of the temple is a large incense cauldron: the smoke is said to bestow health and you’ll see people wafting it onto their bodies.

At the eastern edge of the temple complex is Asakusa-jinja, a shrine built in honour of the brothers who discovered the Kannon statue that inspired the construction of Sensō-ji. (Historically, Japan's two religions, Buddhism and Shintō, were intertwined and it was not uncommon for temples to include shrines and vice versa.) The current building, painted a deep shade of red, dates to 1649 and is a rare example of early Edo architecture. It's also the epicentre of one of Tokyo’s most important festivals, May’s Sanja Matsuri.