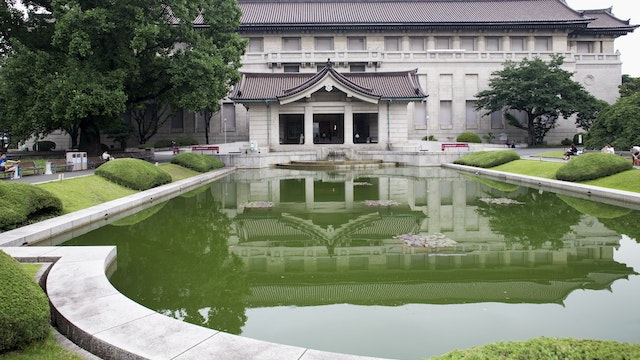 If you visit only one museum in Tokyo, make it the Tokyo National Museum. Here you'll find the world's largest collection of Japanese art, including ancient pottery, Buddhist sculptures, samurai swords, colourful ukiyo-e (woodblock prints), gorgeous kimonos and much, much more.

Visitors with only a couple of hours to spare should focus on the Honkan (Japanese Gallery), which has a specially curated selection of artistic highlights on the 2nd floor.

With more time, you can explore the enchanting Gallery of Hōryū-ji Treasures, which displays masks, scrolls and gilt Buddhas from Hōryū-ji (in Nara Prefecture, dating from 607); the Tōyōkan with its collection of Asian art, including delicate Chinese ceramics; and the Heiseikan, which houses the Japanese Archaeological Gallery, full of pottery, talismans and articles of daily life from Japan's prehistoric periods.

It's also worth checking whether it's possible to access the usually off-limits garden during your visit, which includes several vintage teahouses; it opens to the public from mid-March to mid-April and from late October to early December.

The museum also houses a restaurant, cafe and coffee shop, as well as a souvenir shop in the main building.

The museum held its first exhibition in 1872, making it the oldest museum in Japan. It moved to its current location in Ueno Park in 1882.

The museum regularly hosts temporary exhibitions (which cost extra); these can be fantastic, but sometimes lack the English signage found throughout the rest of the museum.