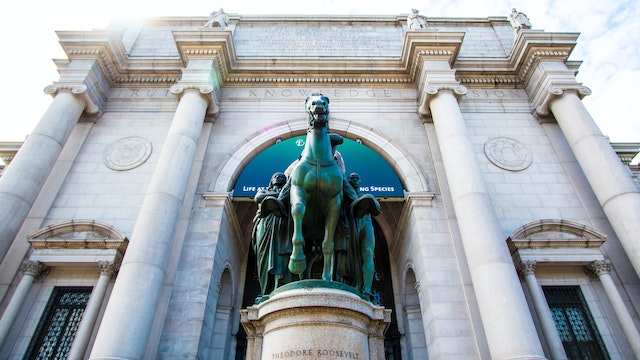 Founded back in 1869, this venerable museum contains a veritable wonderland of more than 34 million objects, specimens and artifacts – including armies of menacing dinosaur skeletons, herds of stuffed wildlife, and a crystal garden of gems and minerals. This New York icon is rightly recognized as one of the world’s top museums of natural history, and it’s a great place to get face to face with a T rex or a blue whale and realize the humble scale of the human race compared to nature’s giants.

When planning what to do in New York with kids, don’t overlook the museum’s Rose Center for Earth & Space, with its cutting-edge planetarium, and the Butterfly Conservatory – open from October through May – a home for more than 500 live butterflies from all over the world that will flutter about and land on your outstretched arms. To prime small travellers, show them the Night at the Museum films, partly filmed at the museum.

On the natural history side, the museum is perhaps best known for its bright and airy Fossil Halls containing nearly 600 specimens, including mammoth crowd-pleasers such as gargantuan Apatosaurus, tremendous Titanosaurus and a fearsome Tyrannosaurus rex frozen mid-prowl (its kitchen knife-sized teeth will scare the bejesus out of you). Triceratops and Stegosaurus also put in appearances. Advancing forward a few million years, there’s also a complete mammoth skeleton.

For those who prefer their wildlife skin-on, there are plentiful animal exhibits packed with American and world species – the stuffed Alaskan brown bears and giant moose are always popular stops. The Milstein Hall of Ocean Life contains dioramas devoted to marine ecologies, weather and conservation, as well as a beloved 94ft replica of a blue whale suspended from the ceiling in a position that mirrors the whale skeleton in the Natural History Museum in London (the AMNH whale came first).

The museum’s Mignone Halls – currently accessible on guided tours – are devoted to gems and minerals, with an impressive set of geodes, gemstones, crystals, and raw metals, including some impressive, supersized gold nuggets. Kids who are inspired by the collection (and new-age types) can pick up souvenir minerals in the gift-shop.

At the 77th St Grand Gallery, there's a 63ft canoe carved in the 1870s and featuring designs from different Native American peoples of the Northwest Coast, alongside anthropological displays on cultures from around the world. The museum was previously fronted by a statue of Theodore Roosevelt with African American and indigenous American attendants, but the sculpture was widely criticized for implying a hierarchy of races, and the New York City Public Design Commission voted to remove it in 2021.

For the astronomical set, the Rose Center is the star of the show. Every hour at the planetarium you can drop yourself into a cushy seat to view stellar displays on the history and mysteries of the universe. Inside this planet (or space-station) shaped building, you'll also find the astonishing Willamette Meteor, a 15.5-ton hunk of metallic iron that fell to earth in present-day Oregon some 30,000 to 40,000 years ago.

The museum was founded in 1869, with support from – amongst other people – Theodore Roosevelt, Sr, father of Theodore Roosevelt, the 26th American president. The collection was originally displayed in the former New York Arsenal at Central Park, built to store the arms of the New York State Militia, but it moved to a purpose-built Victorian Gothic building on the present location in 1874.

The original buildings have since been consumed by a series of expansions and redevelopments – the famous Beaux-Arts entrance on Central Park West was a 1936 addition by John Russell Pope, of Jefferson Memorial fame. In 2019, the museum broke ground on a $383-million expansion set to be completed by 2022 that will include the education-focused Richard Gilder Center for Science, Education and Innovation.

The general admission fee covers the main permanent displays but not special exhibitions; booking online is the best option. Residents of New York, New Jersey and Connecticut can pay what they wish for general admission. In order to see space shows, IMAX films or ticketed exhibits you'll need to pay the higher ticket price for admission plus one show, or admission plus all shows, but it’s only a few dollars extra. Come early in the morning when it opens to beat the crowds (school groups fill the galleries on weekdays, and things are even busier at weekends).

Where to eat near the American Museum of Natural History

There are several museum cafes and a food court, but many take a picnic to Central Park, or eat nearby.