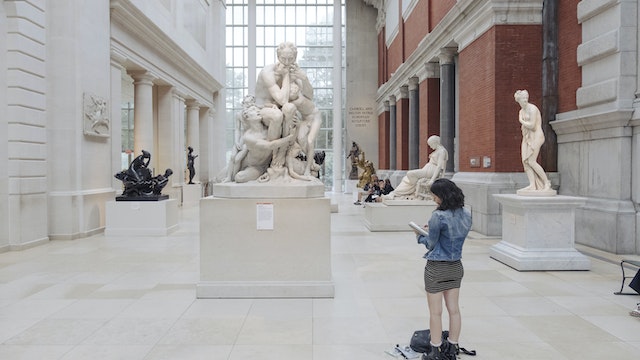 What started with a handful of paintings brought over from Europe or donated by a coterie of philanthropically minded robber barons in the 19th century has since become a massive collection of two million works of art representing 5000 years of history. It's also become one of the most beloved corners of New York City. The Met (as it's affectionately known) has been memorialized in the verses of Leonard Cohen and Jorge Luis Borges, featured prominently on Gossip Girl, and was sorely missed when it closed its doors as the COVID-19 pandemic rocked New York City.

The Metropolitan Museum of Art's 17 acres of exhibit space are full of treasures that have captivated visitors since 1870. You can see everything from ancient Sasanian textiles to Henry VIII’s armor, from the oldest piano in existence to works by Dutch masters like Vermeer, from remarkable quilts out of Gee's Bend, Alabama to Emanuel Gottlieb Leutze's classic portrait Washington Crossing the Delaware. That's not to mention all the perennially popular exhibits on fashion, too, ranging from embroidered kimono to pieces from contemporary designers like Marc Jacobs and Comme des Garçons.

What to see at the Met

When the Met was founded 151 years ago, it was intended not as an emblem of empire like the British Museum or of revolution like the Musée du Louvre. Instead, it was designed to educate and edify a teaming city of immigrants, and underscore the uniquely global culture of 19th century New York City. Whether that stated purpose has been meet by modern, post-colonial standards is up for debate in recent years – a conversation many museums are reckoning with worldwide.

Still, the Met is an ever-evolving classic. As the 2021 PBS documentary Inside the Met notes, what should have been a blockbuster birthday year for the museum's 150th anniversary turned into a reassessment of its approach to both inclusivity and accessibility, including the Met's use of digital space. Newly reopened as of March 13, 2021, the Met is showcasing its global collection in new contexts and inviting fresh discussion about some of its oldest works from contemporary artists.

There's certainly too much to list in its entirety, but here are some of the best highlights:

The 1st-floor ancient Egyptian collection is unrivaled; packed with 26,000 objects spanning six centuries. Absolutely don't miss the Temple of Dendur, built around 10 BCE and relocated to New York in 1978 as a gift from Egypt to the United States for their efforts to help save priceless antiquities like the Temple from the Aswan High Dam project.

The Arms and Armor Department became part of the Met in 1912 thanks to a private donor, but the collection grew immensely when British culture shifted as the Edwardian Age gave way to world wars, inspiring many families to sell off their collections. But it isn't only European suits of armor examples on display – the thousand pieces set out for the public include 16th and 18th century samurai armor from Japan, Turkish swords forged during the reign of Suleiman the Magnificent, and artifacts from Tibet.

A special collection of Islamic art showcases the profoundly influential motifs found in a variety of artistic works from carpets, cast metal objects, illustrated folios, tiled prayer niches, and even caskets. The collection is comprised of unique pieces from throughout the Muslim world, from Iranian mosaics to an intricate gold container made in Goa to contain a bezoars (talismanic gallstones, essentially) that blend Islamic arabesques with Portuguese colonial influences. Travel buffs shouldn't miss the Astrolabe of ‘Umar ibn Yusuf ibn ‘Umar ibn ‘Ali ibn Rasul al-Muzaffari, a Yemeni prince.

Fifteen incredible rooms of the Met are devoted to an extensive collection of art and artifacts from the Middle East. Objects range from Assyrian stone reliefs to cuneiform tablets to ancient Iranian pottery which was made nearly four thousand years before the Common Era. There are tiny incense burners and drinking vessels and massive installations like the iconic human-headed winged bull (technically called a lamassu) statues from the Assyrian city of Nimrud.

The Met started with a handful of Roman sarcophagi and 174 paintings purchased in Europe to kick-start the museum's collections – you've come a long way, baby. On the 2nd floor, the museum now houses numerous masterworks from the 13th through 20th centuries. There's a Duccio di Buoninsegna Madonna painted around 1290 CE, the famous Juan de Pareja portrait painted by Velázquez in 1650, and Gustav Klimpt's 1912 Mäda Primavesi.

Some are OG members of the Met collection like The Meeting of Alexander the Great and Diogenes by Gaspar de Crayer, sold to the Met by co-founder John Taylor Johnson. Others are newcomers like Virgin and Child Enthroned – bought by the Met before COVID-induced acquisition freezes – and the 1636 van Dyck portrait of English Queen Henrietta Maria, bequeathed to the Met by Jayne Wrightsman in 2019. One thing's for sure – there's no shortage of characters, stories, and techniques to absorb.

Some of the oldest works of art on display at the Met are in the Asian Art galleries, which hold 35,000 objects dating back as far as 5000 years. They're also some of the oldest pieces of non-European art in the Met's collection, joining the museum thanks to its earliest patrons. Chinese, Korean, Japanese, Indian and Tibetan paintings, woodcuts, textiles, pottery, decorative objects, lacquers, calligraphy and metalwork await, including Ming vases, Edo-era kimono embroidered with scenes from The Tale of Genji, Buddhist sutras illustrated in gold and silver by Korean master artists, and golden crowns from India.

The American Wing features decorative and fine art from throughout the long, diverse history of the United States, with 20,000 works by artists of Indigenous, Latin American, African American, Euro American descent. From intricately carved and inlaid Tsimshian head dresses to crisp Victorian portraits to fancy Federal furniture, there's a little bit of everything.

Increasingly the Met has grappled with the legacy of colonialism and imperialism inherent in such global collections that were started in eras where standards for respectful acquisitions were much different. But the American Wing is one area where the Met's fresh commitment to changing conversations about its collections and including more diverse voices is on full display. Recent exhibitions have included Indigenous responses to Euro-American works in the collection, while some of the more recent acquisitions in the American wing have showcased an emerging dedication to correcting the museum's track record on including Black artists.

The Met Cloisters are one of the best-beloved parts of the museum, but they aren't actually on the Fifth Ave campus with the rest of the sprawling collection. Instead, they sit on a hilltop overlooking the Hudson River, filled with the Met's medieval treasures, including frescoes, paintings, and the famous tapestry series The Hunt of the Unicorn (1495–1505). It's a little sanctuary within the bustling city, and is a fitting setting for the often sacred context of these artworks.

Department of the Arts of Africa, Oceania, and the Americas

The breadth and depth of works from Africa, Oceania,  South and Central America, and Caribbean works are on full display in the Nelson A. Rockefeller wing of the museum. The expansion of this collection makes it feel relatively new compared to other portions of the museum (it only opened in the 1960s) despite the ancient nature of the ceramics, textiles, jewelry, garments, and other archeological finds on display.

That said, this wing will be undergoing renovation through 2024 to better give these gorgeous works their due. One goal, for example, is to let more natural light in to the galleries, showcasing how colorful and bold many of these artworks can be in contrast to, as one docent put it in Inside the Met, the current, more muted vibe that might evoke painful colonial tropes of "darkest Africa."

The Met is located on the Upper East Side and is easily accessible by bus, subway or on foot. Drivers can park in the garage at the parking garage at Fifth Ave and 80th St, where rates range from $23 for an hour to $55 for the day (New York City prices, natch). The parking garage is also home to the Met's bike racks. Cyclists can also use the museum's bike valet service from May 29 to September 6 at the Fifth Ave plaza near 83rd St. Bicycle valet is available from on weekends from 10:30am - 5:30pm and on select holidays including May 31, July 5 and September 6 during the same hours.

Starting in 2018, the Met changed its admissions policies from a long-standing pay-as-you-wish model to one that charges an entrance fee for those who are not residents of New York State, New Jersey or Connecticut. Visitors from further afield must pay $25 for adults, $17 for seniors 65 and over, and $12 for students. Children under 12 are free.

Due to the COVID-19 pandemic, the Met continues to require timed, ticketed entry, and it's best to make your reservations well in advance to suit your schedule. The Met is open Thursday through Monday from 10am - 5pm and is closed Tuesdays and Wednesdays. If you dislike crowds, avoid weekends.

Self-guided audio tours (adult/child $7/5) are available in 10 languages; download the Met's free smartphone app for excerpts. Guided tours of specific galleries are free with admission. Tickets are good for three consecutive days, and also give admission to the Met Breuer and Cloisters.

If visiting April through October, head up to the excellent roof garden, which features rotating sculpture installations by contemporary and 20th-century artists – though the grand city and park views are the real draw. Enjoy a sundowner cocktail from its on-site bar, the Cantor Roof Garden Bar.

Accessibility at the Met

Entrances located at the Fifth Ave and 81st St and through the parking garage at Fifth Ave and 80th St are accessible for visitors with disabilities. The Met is accessible for those who use wheelchairs and other mobility devices, with elevators available if you need to avoid stairs or slopes. Wheelchairs for use during your visit are available on a first-come, first-served basis from the coat check at the 81st St entrance.

For those attending with a caregiver or assistive interpreter, admission for your companion is free and arrangements can be made at the front desk. The availability of assistive devices and printed materials for visitors who are deaf, heard of hearing, or visually impaired are limited at this time due to COVID-19 sanitation protocols.