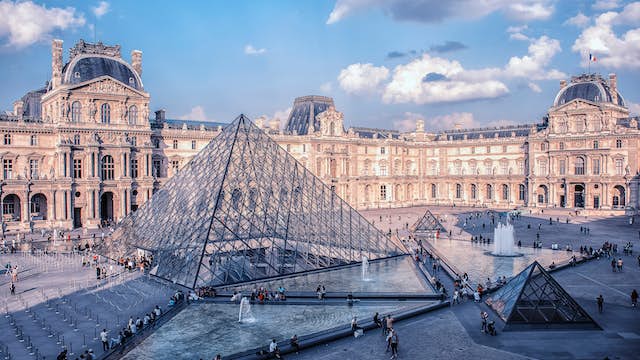 It isn’t until you’re standing in the vast courtyard of the Louvre, with its glass pyramid and ornate façade, that you can truly say you’ve been to Paris.

Holding tens of thousands of works of art–from Mesopotamian, Egyptian and Greek antiquities to masterpieces by artists such as da Vinci (including his incomparable Mona Lisa), Michelangelo and Rembrandt–it’s no surprise that this is one of the world’s most visited museums.

The Louvre contains works of art and artisanship from all over Europe as well as priceless collections of antiquities. The Louvre’s raison d’être is essentially to present Western art (primarily French and Italian, but also Dutch and Spanish) from the Middle Ages to about 1848 – at which point the Musée d’Orsay takes over–as well as works from ancient civilisations that formed the West's cultural foundations.

Long before its modern incarnation, the vast Palais du Louvre originally served as a fortress constructed by Philippe-Auguste in the 12th century; it was rebuilt in the mid-16th century as a royal residence in the Renaissance style. The Revolutionary Convention turned it into a national museum in 1793.

When the museum opened in the late 18th century it contained 2500 paintings and objets d’art; the ‘Grand Louvre’ project inaugurated by the late president François Mitterrand in 1989 doubled the museum’s exhibition space, and both new and renovated galleries have opened in recent years devoted to objets d’art such as the crown jewels of Louis XV. The Islamic art galleries are in the restored Cour Visconti.

The sheer size of the place can be overwhelming. However, there’s an array of self-guided thematic trails (1½ hours; download trail brochures in advance from the website) ranging from a Louvre masterpieces trail to the art of eating, plus several for kids (hunt lions, galloping horses).

The main entrance is through the 21m-high Grande Pyramide, a glass pyramid designed by the Chinese-American architect IM Pei (1917–2019).

Standard tickets are €15. The only way to guarantee entry is by booking online (€2 surcharge) or making a time-slot reservation through the Paris Museum Pass. You can avoid the longest queues (for security) outside the pyramid by entering the Louvre complex via the underground shopping centre Carrousel du Louvre, or the Porte des Lions entrance. If you don't have a pre-bought ticket, you'll need to queue up again to buy your ticket once inside (not recommended at peak times, when capacity can mean anyone without a prior reservation won't get in). Tickets are only valid for the duration of your visit (you can no longer come and go as you please throughout the day).

During the COVID-19 pandemic, the Louvre introduced new measures such as timed-tickets and a ban on cash. It has at times closed in response to lockdown measures. Always check the website for the latest information.

Hotels near the Louvre