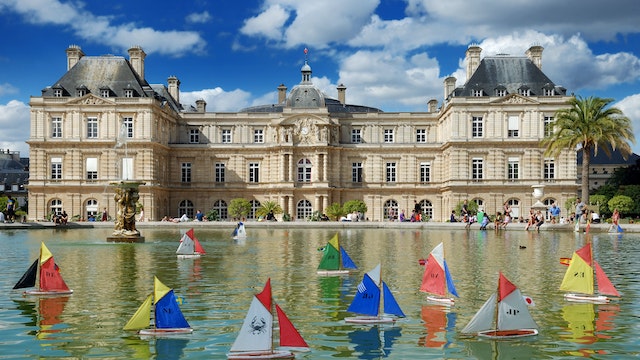 This famous inner-city oasis of formal terraces, chestnut groves and lush lawns has a special place in Parisians' hearts.

Napoléon dedicated the 23 gracefully laid-out hectares of the Luxembourg Gardens to the children of Paris, and many residents spent their childhood prodding 1920s wooden sailboats with long sticks on the octagonal Grand Bassin pond, watching puppets perform puppet shows at the Théâtre du Luxembourg and riding the carrousel (merry-go-round) or ponies. All those activities are still here today, as are modern playgrounds and sporting and games venues.

Dozens of apple varieties grow in the orchards in the gardens’ south, while bees have produced honey in the nearby Rucher du Luxembourg since the 19th century; the two-day Fête du Miel (Honey Festival) takes place in late September. Around the back of the Musée du Luxembourg, lemon and orange trees, palms, grenadiers and oleanders shelter from the cold in the palace’s orangery.

The gardens are a backdrop to the Palais du Luxembourg, built in the 1620s for Marie de Médici, Henri IV’s consort, to assuage her longing for the Pitti Palace in Florence, where she had spent her childhood. Since 1958 the palace has housed the Sénat, the Upper House of French Parliament, which is occasionally visitable by guided tour. East of the palace is the Italianate, 1630-built Fontaine des Médicis, an ornate fish pond.

Nearby, the heavily guarded Hôtel du Petit Luxembourg was the modest 16th-century pad where Marie de Médici lived while the Palais du Luxembourg was being built. The president of the Senate has called it home since 1825.

If you’re planning on picnicking, forget bringing a blanket – the elegantly manicured lawns are off limits apart from a small wedge on the southern boundary. Instead, do as Parisians do, and corral one of the iconic 1923-designed green metal chairs and find your own favourite part of the park.

Entry to the park is free, but there is a price to enter the Musée du Luxembourg, which hosts prestigious temporary art exhibitions.