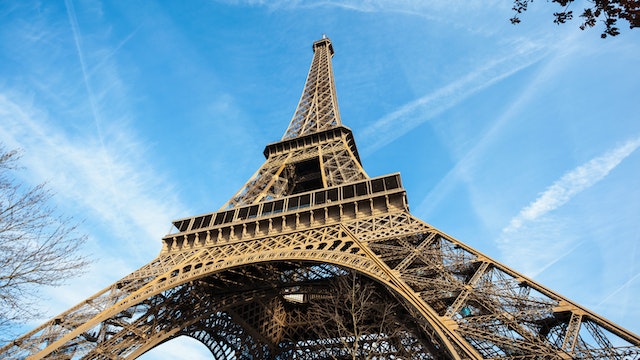 There are different ways to experience the Eiffel Tower, from a daytime trip or an evening ascent amid twinkling lights, to a meal in one of its restaurants. And even though some seven million people come annually, few would dispute that each visit is unique – and something that simply has to be done when in Paris.

Named after its designer, Gustave Eiffel, the Tour Eiffel was built for the 1889 Exposition Universelle (World's Fair). It took 300 workers, 2.5 million rivets and two years of nonstop labor to assemble. Upon completion, the tower became the tallest human-made structure in the world (324m) – a record held until the 1930 completion of New York's Chrysler Building. A symbol of the modern age, it faced opposition from Paris’ artistic and literary elite, and the ‘metal asparagus’, as some snidely called it, was originally slated to be torn down in 1909. It was spared only because it proved an ideal platform for the transmitting antennas needed for the newfangled science of radiotelegraphy.

Sporting six different colors throughout its lifetime, the tower has been painted red and bronze since 1968. Work is underway to strip the previous 19 coats and apply the yellow-brown shade originally conceived by Gustave Eiffel, giving it a new golden hue in time for the 2024 Olympics.

Of the tower's three floors, the 1st (57m) has the most space but least impressive views. The glass-enclosed Pavillon Ferrié houses an immersion film along with a small cafe and souvenir shop, while the outer walkway features a discovery circuit to help visitors learn more about the tower’s ingenious design. Check out the sections of glass flooring that provide a dizzying view of the ant-like people walking on the ground far below. This level also hosts the restaurant 58 Tour Eiffel. The 1st floor's commercial areas are powered by two sleek wind turbines within the tower.

Views from the 2nd floor (115m) are the best – impressively high but still close enough to see the city below. Telescopes and panoramic maps pinpoint locations in Paris and beyond. Story windows give an overview of the lifts’ mechanics, and the vision well allows you to gaze through glass panels to the ground. Also up here are toilets, a souvenir shop, a macaron bar, and Michelin-starred restaurant Le Jules Verne.

Views from the wind-buffeted top floor (276m) stretch up to 60km on a clear day, though at this height the panoramas are more sweeping than detailed. Celebrate your ascent with a glass of bubbly (€13 to €22) from the Champagne bar (open 10.15am to 10.15pm). Afterwards peep into Gustave Eiffel’s restored top-level office, otherwise known as the 'secret apartment', where lifelike wax models of Eiffel and his daughter Claire greet Thomas Edison.

Tours, tickets and other practicalities

Visitors must pass through security at the bullet-proof glass barriers surrounding the tower's base. The two entrances to the glass enclosure are on avenue Gustave Eiffel; the two exits are on quai Branly.

Ascend as far as the 2nd floor (either on foot or by lift), from where there's a separate lift to the top floor (closed during heavy winds). Pushchairs must be folded in lifts and bags or backpacks larger than aeroplane-cabin size aren't allowed. Note that the top floor and stairs aren't accessible to people with limited mobility.

Pre-purchasing tickets online gives you an allocated time slot and means you only have to queue for security. Print your ticket or show it on your phone. If you can’t reserve your tickets ahead of time, expect lengthy waits for tickets in high season.

Stair tickets can't be reserved online. Buy them at the south pillar, where the staircase can also be accessed: the climb consists of 360 steps to the 1st floor and another 360 steps to the 2nd floor.

If you have reservations for either restaurant, you're granted direct post-security access to the lifts.

For the best view of the light show, head across the Seine to the Jardins du Trocadéro.

Did you know this about the Eiffel Tower?