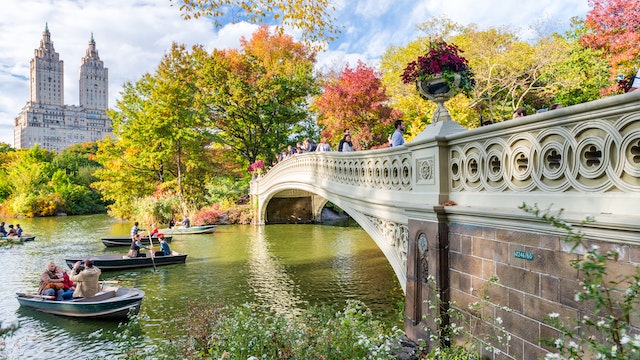 One of the world’s most renowned green spaces, Central Park comprises 843 acres of rolling meadows, boulder-studded outcroppings, elm-lined walkways, manicured European-style gardens, a lake and a reservoir — not to mention an outdoor theater, a memorial to John Lennon, an idyllic waterside eatery and a famous Alice in Wonderland statue.

Highlights include the 15-acre Sheep Meadow, where thousands of people lounge and play on warm days; Central Park Zoo; and the forest-like paths of the Ramble, popular with birdwatchers. In warm weather there are free outdoor concerts on the Great Lawn and top-notch drama at the annual Shakespeare in the Park productions held each summer at the open-air Delacorte Theater. Other recommended stops include the Shakespeare Garden, on the west side between 79th and 80th Sts, with its lush plantings and excellent skyline view.

The history of Central Park

Like the city’s subway system, the vast and majestic Central Park, a rectangle of open space in the middle of Manhattan, is a great class leveler – exactly as it was envisioned. Created in the 1860s and ’70s by Frederick Law Olmsted and Calvert Vaux on the marshy northern fringe of the city, the immense park was designed as a leisure space for all New Yorkers regardless of color, class or creed.

Central Park is actually only the fifth largest park in New York City, trailing behind other local greenspaces like Pelham Bay and Van Cortlandt parks in the Bronx, the Greenbelt on Staten Island, and Flushing Meadows Corona Park in Queens. But over 800 acres is nothing to sneeze at in tony, dense upper Manhattan – even in the mid-19th century when New York City was just a fraction of its present size, much of the land had to be acquired by eminent domain.

Ironically, what is now Central Park was commandeered from settlements like Seneca Village, home to the very immigrants and free Black community members the park was ostensibly supposed to benefit. From that raw, swampy material Olmsted and Vaux were tasked with creating a place where the rich could see and be seen in their carriages and promenading in fine clothing, and later where the middle and lower classes could gather away from pubs and in lieu of garden cemeteries.

Olmsted was inspired by Birkenhead Park near Liverpool – the first taxpayer funded public park in England – during a trip he later recounter in his travel memoir Walks and Talks of an American Farmer in England. The trick, of course, would be to create what felt like a natural American landscape where once there had been pig mucks and and urban detritus.

The result was, after many years, huge sums of money, thousands of laborers, and slow progress during the Civil War, a sprawling green space that felt distinct from the city bordering it in both its democratic vision and pastoral expanse. It was also a triumph of engineering.

Olmsted and Vaux (who also created Prospect Park in Brooklyn) were determined to keep foot and road traffic separated and cleverly designed the crosstown transverses under elevated roads to do so. It’s also an oasis from the urban crush: the lush lawns, cool forests, flowering gardens, glassy bodies of water and meandering, wooded paths provide the dose of serene nature that New Yorkers crave.

The legacy of Central Park

The success of Olmsted's vision – and his first major project – went on to launch his career (and influence generations of landscape architecture) with commissions from Buffalo to San Francisco, from the manicured grounds of the Biltmore Estate to the trailing parks of Atlanta.

It's no wonder it's one of the most popular film locations in cinematic history, cropping up not just as a background but a character in movies like Hair, When Harry Met Sally, Enchanted and The Muppets Take Manhattan. It's also no wonder that Central Park quickly became a nexus of New York architecture, fringed by buildings that both benefit from proximity to the city's back yard and try to live up to its larger-than-life legacy.

Things to do in Central Park

Today, this ‘people’s park’ is still one of the city’s most popular attractions, beckoning throngs of New Yorkers year round. While parts of the park swarm with joggers, inline skaters, musicians and tourists on warm weekends, it’s quieter on weekday afternoons, especially in the less-trodden spots above 72nd St, such as the Harlem Meer and the North Meadow (north of 97th St).

During summer in Central Park, you can try activities from fishing to camping without once leaving Manhattan, or make like countless movie characters and head to the Victorian Bow Bridge, which spans Central Park Lake and connects Cherry Hill and the Ramble. Nearby, ornate Bethesda Fountain edges the lake, and its Loeb Boathouse is a beloved attraction where you can rent rowboats or enjoy lunch.

Speaking of eats, Central Park's designers may have intentionally included few buildings in their landscape, but Tavern on the Green is a New York classic for a reason. Designed by Vaux himself in 1870 as an actual sheep paddock, the structure was turned into a restaurant in 1934 by Robert Moses, and it eventually earned a landmark reputation in the city's already competitive, legendary food scene.

Former New York Times restaurant critical Ruth Reichl once observed in the pre-smartphone 1990s, "To thousands of visitors, Tavern on the Green is New York. They are so happy to be here that you see them all around the room, videotaping one another as they eat their meals." Though it closed in 2009 for a few years, Tavern on the Green has been open again since 2014.

Folks flock to the park even in winter, when snowstorms inspire cross-country skiing and sledding or just a simple stroll through the white wonderland, and crowds turn out every New Year’s Eve for a midnight run. Also very popular is skating on one of two stretches of ice in Central Park – Wollman Rink, located in the southeast part of the park, and Lasker Rink in the north.

The Central Park Conservancy offers ever-changing guided tours of the park, including ones that focus on public art, wildlife and places of interest to kids (check online for dates and times; most tours are free or $15. To get the lay of the land at a faster clip, there's numerous running routes through Central Park, too.

Getting to Central Park

As for bus routes, there are over a dozen to choose from, but some of the most accessible include the M10 the runs up the Central Park West side, the M20 from Penn Station, and the Q32 from Grand Central.

Free and metered street parking exists around Central Park, though you'll want to be sure to check signage to make sure you won't run afoul of the meter maids. There are numerous paid lots and garages, too, where you can park for an hour or for the day.

Central Park's rolling topography was created well before the ADA became the law of the land, so you might be curious how it holds up for visitors with disabilities. The Central Park Conservancy publishes an accessibility map to help visitors plan ahead for use of a wheelchair, rollator, cane, or other mobility aids.

The accessibility map has marked and color coded different degrees of incline throughout the park, as well as where you may find obstacles like stairs, or accessible features from restrooms to trails to subway stations.

Central Park is also home to the Robert Bendheim Playground, which was redesigned in 1996 to accommodate children of all abilities. It features ramps, a wheelchair accessible water feature, an elevated sandbox, and play structures with auditory features for Deaf and hard-of-hearing kids and their caregivers.