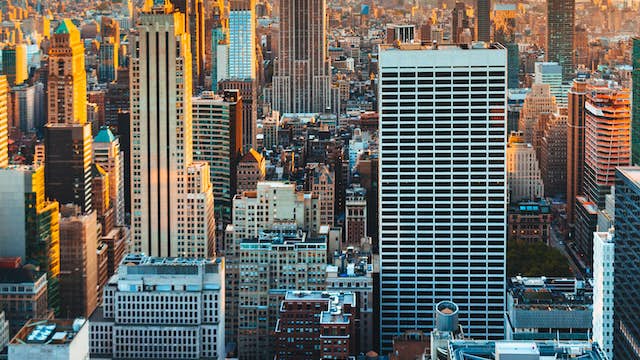 The Chrysler Building may be prettier, and One World Trade Center taller, but the queen bee of the New York skyline remains the Empire State Building. NYC's former tallest star has enjoyed close-ups in around a hundred films and countless skyline snapshots. Heading up to the top is as quintessentially New York as pastrami, rye and pickles.

It's been scaled by King Kong, drawn lovers together in films like Sleepless in Seattle, and survived a 1945 plane crash. It was lit up in tribute to front-line workers as the COVID-19 pandemic ravaged the boroughs, just ninety years after construction began and it became an instant icon of a rapidly growing city. It's recognizable to Manhattanites and visitors from all over the world, and to many it's synonymous with the Big Apple itself.

The history of the Empire State Building

The statistics are astounding: 10 million bricks, 60,000 tons of steel, 6400 windows and 328,000 sq ft of marble. Built on the original site of the Waldorf-Astoria Hotel, construction took a record-setting 410 days, using seven million hours of labor and costing a mere $41 million. It might sound like a lot, but it fell well below its $50 million budget (just as well, given it went up during the Great Depression).

The Empire State Building was designed by the prolific architectural firm Shreve, Lamb and Harmon. According to legend, the skyscraper's conception began with a meeting between William Lamb and building co-financier John Jakob Raskob, during which Raskob propped up a No 2 pencil and asked, 'Bill, how high can you make it so that it won't fall down?'

Coming in at 102 stories, the towering building would have been impossible with the engineering of the electric elevator – can you imagine having to walk up all those stairs? Prefabricated I-beams, columns, and other components manufactured in Pittsburgh were also crucial to ensuring quality and speed of construction.

Steelworkers assembled the parts on site, sometimes high up in the sky – a site captured in iconic photos of riveters on the high iron. Many of the workers were members of the Mohawk nation and came to New York from the Kahnawake reservation near Montréal to ply their trade. Their affinity for heights earned them the nickname "skywalkers," and is a tradition that continues today.

The Art Deco limestone tower officially opened for business on May 1, 1931, just after the Great Depression had halted the white-hot race to build ever-taller sky scrapers (including Empire State's early rival, the Chrysler Building), with the Empire State Building reigning supreme. Generations later, Deborah Kerr's words to Cary Grant in An Affair to Remember still ring true: 'It's the nearest thing to heaven we have in New York.'

How tall is the Empire State Building?

There are two observation decks. The open-air 86th-floor deck offers an alfresco experience, with telescopes (previously coin operated; now free) for close-up glimpses of the metropolis in action. Further up, at the top of the spire, the enclosed 102nd floor is New York's second-highest observation deck, trumped only by the observation deck at One World Trade Center.

Needless to say, the views through the floor-to-ceiling windows over the city's five boroughs (and four neighboring states, weather permitting) are quite simply exquisite. On a clear day you can see as much as 80 miles in the distance. The views from both decks are especially spectacular at sunset, when the city dons its nighttime cloak in dusk’s afterglow.

As one of NYC's most popular sights, it can see long queues, though a new entrance redesign has eased some of the bottlenecks. Getting here early (like 8AM) or late will help avoid delays, as will buying tickets in advance online (worth the $2 convenience fee).

Your first stop is the Story of an Icon museum on the 2nd floor, which was completely redesigned in 2019 with multimedia exhibits on the building's history and its place in the United States' cultural imagination. The path through the displays leads you to the observatory elevators.

As one would expect, the views from both decks are especially spectacular at sunset. For a little of that 'Arthur's Theme' magic, head to the 86th floor between 10pm and 1am Thursday to Saturday, when the twinkling sea of lights is accompanied by a soundtrack of live saxophone (requests are welcome).

Since 1976, the building’s top 30 floors have been floodlit in a spectrum of colors each night, reflecting seasonal and holiday hues, or for local sports teams or charitable organizations. Famous combos include orange, white and green for St Patrick’s Day; blue and white for Chanukah; red, white and green for Christmas; and rainbow colors for Gay Pride weekend in June. For a full rundown of color schemes and the schedule, check the website.

A locked, unmarked door on the 102nd-floor observation deck leads to one of New York's most outrageous pie-in-the-sky projects to date: a narrow terrace intended to dock zeppelins. Spearheading the dream was former New York governor Alfred E Smith, who went from failed presidential candidate in 1928 to head honcho of the Empire State Building project. When architect William Van Alen revealed the secret spire of his competing Chrysler Building, Smith went one better, declaring that the top of the Empire State Building would sport an even taller mooring mast for transatlantic airships.

While the plan looked good on paper, there were two (major) oversights: dirigibles require anchoring at both ends (not just at the nose, as planned) and passengers (who travel in the zeppelin's gondola) cannot exit the craft through the giant helium-filled balloon. Regardless, it didn't stop them from trying. In September 1931, the New York Evening Journal threw sanity to the wind, managing to moor a zeppelin and deliver a pile of newspapers fresh out of Lower Manhattan.

The famous antenna was originally meant to be a mooring mast for zeppelins, but the Hindenburg disaster slammed the brakes on that plan. Though the ambitious plan for docking airships never got off the ground, years later an aircraft met up with the building with tragic consequences: a B-25 bomber crashed into the 79th floor on a foggy day in 1945, killing 14 people.