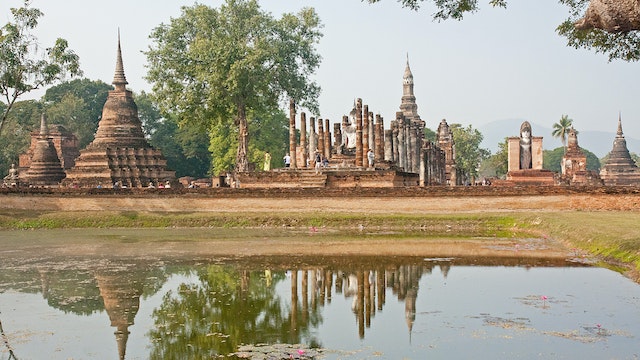 The Sukhothai Historical Park ruins are one of Thailand’s most impressive World Heritage sites. The park includes the remains of 21 historical sites and four large ponds within the old walls, with an additional 70 sites within a 5km radius. The ruins are divided into five zones; the central, northern and western zones each have a separate 100B admission fee. Note that motorbikes and cars are no longer allowed inside the park.

The architecture of Sukhothai temples is most typified by the classic lotus-bud chedi, featuring a conical spire topping a square-sided structure on a three-tiered base. Some sites exhibit other rich architectural forms introduced and modified during the period, such as bell-shaped Sinhalese and double-tiered Srivijaya chedi.

Despite the popularity of the park, it’s quite expansive and solitary exploration is usually possible. Some of the most impressive ruins are outside the city walls, so a bicycle is essential to fully appreciate everything. Electric buggies (two to four people, without/with driver 200/400B per hour) can also be hired to get around the park.