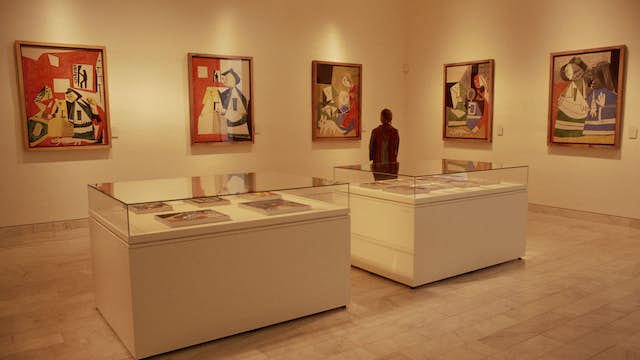 Located along the grand, medieval street of Carrer de Montcada, the Museu Picasso is dedicated to one of the world’s greatest artists, Pablo Picasso. Born in the Andalusian city of Málaga in 1881, Picasso moved to Barcelona at age 14, where he spent his adolescence, youth and formative years with his family.

Opened in 1963, the “Picasso Museum” not only showcases some of the painter’s earliest works, but it aims to show the strong, emotional bond Picasso had with the city, which was key in discovering, developing and shaping his artistic skills. The museum occupies five Medieval palaces, providing an immense setting for visitors to take in the 4000 or so original works on display.

Jaume Sabartés was a Catalan writer and Picasso’s close friend and personal secretary. He conceived an idea of creating a museum dedicated to Picasso but wanted to put it in Picasso’s birth city of Málaga. Picasso, however, convinced Sabartés to open it in Barcelona. This was, after all, the city where he’d become a recognized artist, spending his days mixing with intellectuals and visionaries in places like Quatre Gats, a bar in the Gothic Quarter that served as a meeting point for artists.

Picasso and Sabartés opened their gallery in 1963, mainly with Sabartés’ private collection, and named it Col.lecció Sabartés. Picasso deliberately omitted his name from the museum to avoid censorship, as the artist’s well known political views opposed the Franco regime.

At the beginning, the museum only occupied Aguilar Palace, one of the five current mansions that house the gallery, but, after subsequent donations, including 58 paintings of Las Meninas de Velázquez and 921 of his earliest works, the first expansion was carried out in 1970 by annexing Baró del Castellet Palace.

Despite Picasso’s death in 1973, the museum kept expanding and growing over the following decades, eventually becoming one of the most appreciated cultural heritage sites in Barcelona.

For potential visitors, it’s worth noting that Picasso’s most famous works are spread out across the globe. Paintings like Guernica, Three Musicians or Family of Saltimbanques, for example, are all displayed in Madrid, New York City and Washington DC, respectively.

Museu Picasso, however, is unique in a way that it contains the largest collection of works from the artist’s earliest years, crucial to understanding Picasso’s world and the solid connection he had with the city of Barcelona. Though the collection does include some of his trademark Cubist masterpieces too.

The permanent collection is displayed in Palau Aguilar, Palau del Baró de Castellet and Palau Meca. The first few rooms are dedicated to his initial paintings, consisting of complex portraits that already showcase Picasso’s great talent. For that, Aunt Pepa Portrait (1896) is a fine example.

The museum also displays several paintings from his well-known Blue-period (1901-1904), when Picasso painted monochromatic paintings in shades of blue. The Rooftops of Barcelona (1903) is a well-known piece from this time.

Picasso, however, is more internationally known as one of the pioneers of Cubism, an art movement from the beginning of the 20th century that consisted of elements all fragmented, like in a broken puzzle. The last rooms of the permanent collection contain some excellent Cubist examples, the most acclaimed being his series of Meninas de Velázquez. In these paintings, the artist Picasso represents the work of Diego Velázquez in Cubist style.

How to enter Museu Picasso for free

Entry to the museum is free of charge on Thursday afternoons, from 5pm to 8pm, the first Sunday of each month, and on the following days: February 12, May 18 and September 24.

It’s worth noting that capacity is reduced on these days, so booking online in advance is recommended.

Museu Picasso opens Tuesday to Sunday, from 10am to 8pm. On Mondays the museum is closed.

How to get to Museu Picasso

Museu Picasso is located on Carrer de Montcada, which dates back to the 12th century and was once the city’s most coveted address. It is located in the Old City, in El Born district. Jaume I (Line 4) is the closest metro station.

El Born is the area with the largest culinary range in Barcelona, with fine-dining restaurants, international eateries and informal tapas spots aplenty.

Bar Joan is one of the oldest in the area. They offer market cuisine, serving all the classic Spanish tapas, but also traditional Catalan and Spanish dishes. Tiny Tantarantana is another local restaurant serving delicious tapas, with terrace tables and an informal atmosphere. If you are a fan of Asian dishes, Red Ant is a popular place for noodles and craft beer.