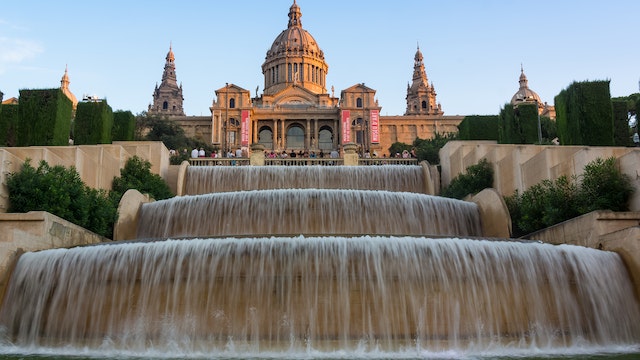 The spectacular neobaroque silhouette of the Palau Nacional can be seen on Montjuïc's slopes from across the city. Built for the 1929 World Exhibition and restored in 2005, it houses a vast collection of mostly Catalan art spanning the early Middle Ages to the early 20th century. The high point is the unique collection of extraordinary Romanesque frescoes.

This building has come to be one of the city’s prime symbols of the region’s separate Catalan identity, but the fact that it was constructed under the centralist dictatorship of Miguel Primo de Rivera lends a whiff of irony.

The real highlight here is the Romanesque art section, considered the most important concentration of early medieval art in the world. Rescued from neglected country churches across northern Catalonia in the early 20th century, the collection consists of 21 frescoes, woodcarvings and painted altar frontals (low-relief wooden panels that were the forerunners of the elaborate altarpieces that adorned later churches). The insides of several churches have been recreated and the frescoes – in some cases fragmentary, in others extraordinarily complete and alive with colour – have been placed as they were when in situ.

The two most striking fresco sets follow one after the other. The first, in Sala 5, is a magnificent image of Christ in Majesty created around 1123. Based on the text of the Apocalypse, we see Christ enthroned on a rainbow with the world at his feet. He holds a book open with the words Ego Sum Lux Mundi (I am the Light of the World) and is surrounded by the four Evangelists. The images were taken from the apse of the Església de Sant Climent de Taüll in northwest Catalonia. Nearby in Sala 9 are frescoes done around the same time in the nearby Església de Santa Maria de Taüll. This time the central image taken from the apse is of the Virgin Mary and Christ Child. These images were not mere decoration but tools of instruction in the basics of Christian faith for the local population – try to set yourself in the mind of the average medieval citizen: illiterate, ignorant, fearful and in most cases eking out a subsistence living. These images transmitted the basic personalities and tenets of the faith and were accepted at face value by most.

Opposite the Romanesque collection on the ground floor is the museum’s Gothic art section, with Catalan Gothic painting and works from other Spanish and Mediterranean regions. Look out especially for the work of Bernat Martorell in Sala 32 and Jaume Huguet in Sala 34. Among Martorell’s works figure images of the martyrdom of St Vincent and Santa Eulàlia. Huguet’s Consagració de Sant Agustí, in which St Augustine is depicted as a bishop, is dazzling in its detail.

Next you pass into the 2018-launched Renaissance & Baroque gallery, which exhibits some 300 Spanish and international pieces spanning the 16th to 19th centuries, including works by Diego Velázquez, Francisco de Zurbarán, Josep de Ribera, Francisco Goya, Tiepolo, Rubens, El Greco and Canaletto. Incorporated into this section are two eclectic and excellent private collections, the Cambò Bequest by Francesc Cambó and the Thyssen-Bornemisza collection on loan to the MNAC by Madrid's Museo Thyssen-Bornemisza.

Up on the next floor, beyond a beautiful domed hall, the collection turns to modern art, mainly but not exclusively Catalan. These galleries are arranged thematically: Modernisme, Noucentisme, Art and the Civil War and so on. Among the many highlights: an early Salvador Dalí painting (Retrat del Meu Pare/Portrait of My Father), Juan Gris' collage-like paintings, the brilliant portraits of Marià Fortuny, and 1930s call-to-arms posters against the Francoist onslaught (nearby you'll find photos of soldiers and bombed-out city centres).

Also on show are items of Modernista furniture and decoration, which include chairs by Gaudí and a mural by Ramon Casas that once adorned the legendary bar and restaurant Els Quatre Gats.

After all this, you can relax in the museum restaurant, which offers great views north towards Plaça d’Espanya, and be sure to take in the fine city view from the terrace just in front of the museum, which draws crowds around sunset. Students can use the Biblioteca del MNAC, the city’s main art reference library.