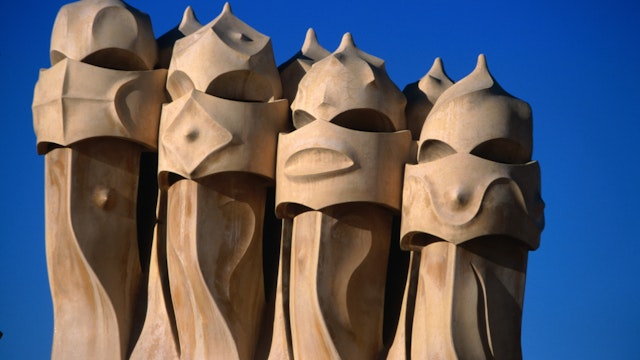 In the top tier of Gaudí's achievements, this madcap Unesco-listed masterpiece, with 33 balconies, was built in 1905–10 as a combined apartment and office block. Formally called Casa Milà, after the businessman who commissioned it, it is better known as La Pedrera (the Quarry) because of its uneven grey stone facade, which ripples around the corner of Carrer de Provença. Gaudí's approach to space and light as well as the blurring of the dividing line between decoration and functionality are astounding.

When commissioned to design this apartment building, Gaudí wanted to top anything else done in L’Eixample. Pere Milà had married the older and far richer Roser Guardiola, the widow of Josep Guardiola, and clearly knew how to spend his new wife's money. Milà was one of the city’s first car owners and Gaudí built parking space into this building, itself a first.

The natural world was one of the most enduring influences on Gaudí’s work, and the building's undulating grey-stone facade evokes a cliff-face sculpted by waves and wind. The wave effect is emphasised by elaborate wrought-iron balconies that bring to mind seaweed washed up on the shore. The lasting impression is of a building on the verge of motion – a living building.

The roof is the most extraordinary element, where Gaudí’s blend of mischievous form with ingenious functionality erupts into chimney pots looking like multicoloured medieval knights. Some are unadorned, others are decorated with trencadís (ceramic fragments) or even broken cava bottles. Short concerts are often staged up here in summer. Gaudí wanted to put a tall statue of the Virgin up here too: when the Milà family said no, fearing it might make the building a target for anarchists, Gaudí resigned from the project in disgust.

One floor below the roof, in the attic where you can appreciate Gaudí’s taste for parabolic arches (270 of them), is a modest museum dedicated to his work.

The next floor down is the apartment (El Pis de la Pedrera). It is fascinating to wander around this elegantly furnished home, done up in the style a well-to-do family might have enjoyed in the early 20th century. The sensuous curves, rippling distribution and unexpected touches in everything from light fittings to bedsteads, from door handles to balconies, might seem admirable to us today, but not everyone thought so at the time. The story goes that one tenant, a certain Mrs Comes i Abril, had complained that there was no obvious place to put her piano in these wavy rooms. Gaudí’s response was to suggest that she take up the flute.

'Premium' tickets (adult/child €32/14) allow you to skip the queue. Other options include an 'essential and night' ticket (€44/23.50) which includes a guided evening tour. Otherwise, buy tickets online (saving €3 on most ticket types) for opening time to avoid the worst of the crowds.