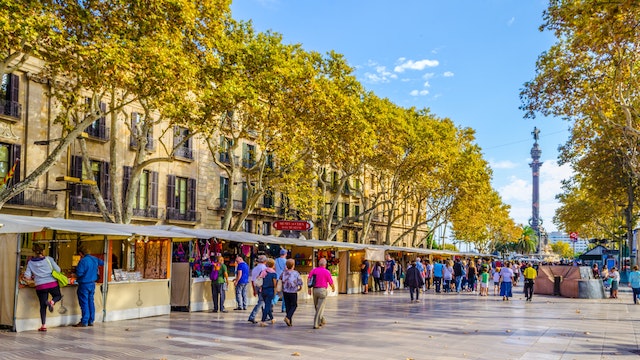 La Rambla is a tree-lined boulevard featuring a wide array of architectural delights, beautifully decorated flower stalls and particularly talented (and certified) human statues. Foodies will definitely enjoy the tapa joints at Mercat de la Boqueria, considered by many to be the best gourmet food market in Europe.

It is infamous for the incredible numbers of both pickpockets and tourist-first restaurants serving mediocre paella, but there is plenty to see and appreicate.

Linking Plaça de Catalunya, the central square in Barcelona, with the old harbor, strolling La Rambla, or ramblejar, as the local people say, while admiring the imposing facades and doing some people watching, is something everyone should experience when visiting Barcelona.

Unlike most landmarks in Barcelona, the history of La Rambla is neither epic nor glamorous.

Its name comes from the Arabic word ‘’ramla’’, which translates into ‘’sandy or muddy area’’. Today’s La Rambla used to be an open sewer named Riera d’en Malla, which also served as a natural culvert for the water coming from Collserola, the hills that limit Barcelona to the north.

In the 15th century, the Barcelona Council wanted to extend its city walls by including El Raval district. For that, they had to divert the stream, so it could flow outside of the walls. The empty area resulting from the stream diversion became the actual street that was later named La Rambla. Over the following decades, several convents and monasteries were built along La Rambla, but most of them were burnt down during the anti-clerical revolution of 1835.

It wasn’t until then, that La Rambla started flourishing. The most visited landmarks like Plaça Reial, Mercat de la Boqueria, Teatre Liceu, and Font de Canaletes were all built in the 19th century on the ground where Catholic buildings used to stand.

With the arrival of mass tourism, however, La Rambla has turned into the busiest tourist hot spot in the city, losing the local essence that once used to prevail there. Barcelonins are a rare thing to see these days, the reason why this was the area most affected by the consequences of COVID-19. The restaurants along the boulevard initiated a campaign to attract local customers by offering big discounts, but it’s been so long since the arrival of mass tourism, that barcelonins are not used to going there anymore.

La Rambla or Les Rambles? During your visit, you will probably realize that some locals call it La Rambla, while others say Les Rambles. This can be confusing for first-time visitors, but both terms are accepted.

La Rambla refers to the whole pedestrian boulevard, while the plural form of Les Rambles refers to the five different sections into which it is divided. These distinct sections will help you shape your walking tour.

The first stretch of the famed boulevard is La Rambla de Canaletes, home to the Font de Canaletes. It is said that whoever tastes the water flowing from this fountain, will certainly come back to Barcelona one day – a local legend that always encourages happy visitors to drink from it. Canaletes is also the place where FC Barcelona fans gather when the football club wins titles. Meander down the road and you will bump into Església de Betlem, a 17th-century baroque church, and one of the few which wasn’t burned down during the anti-clerical revolution.

The boulevard’s second stretch is named La Rambla dels Estudis, named after Estudi General de Barcelona, a 16th-century university and the predecessor of Universitat de Barcelona, one of the top public universities in Spain.

Art lovers will enjoy walking through the third stretch called La Rambla de les Flors, which features a big mosaic made by surrealist painter Joan Miró, as well as the neoclassical Virreina Palace. Operating continuously since the 19th century, the flower market can be found in this section too. The newest addition to the sites is a memorial for the victims of the 2017 terrorist attack.

Continue rambling down the boulevard until you find La Rambla dels Caputxins, named after a former monastery inhabited by friars from the Capuchin order. This is where you’ll find the acclaimed El Mercat de la Boqueria, a central market offering all the freshest produce in Barcelona. In La Boqueria, look for Pinocho Bar, an award-winning, 75-year-old tapa joint where, despite being consistently packed with visitors, the food quality remains impressive. Don’t miss their calamarcets amb mongetes de Santa Pau (little squid with local white beans). Across the street, pop into the very popular Erotic Museum, thought to be a bit sassy by some, the museum takes you through the fascinating influence of sexuality throughout the history of Barcelona.

The last stretch of road belongs to La Rambla de Santa Mònica, also named after one of the monasteries which burned down in 1835. The southern edge of La Rambla leads into the 60m tall Columbus statue, which overlooks the old harbor of Barcelona.

How to get to La Rambla

Plaça Catalunya metro (Line 1, Line 3 and FGC) is located on the northern edge of La Rambla which is considered the starting point.

Liceu and Drassanes metro stations (Line 3), are located in the middle and south end of La Rambla, respectively.

Things to do around La Rambla

La Rambla is a 1.2km boulevard that goes through the Old City, dividing the Gothic area and El Raval.

On El Raval side, the Museum of Contemporary Art is one of the most visited museums in Barcelona. La Rambla del Raval is also gorgeous, much quieter, plus it features a cat statue made by the Colombian artist Botero.

The Gothic area doesn’t come up short when it comes to neo-Gothic and Gothic buildings, the Barcelona Cathedral being the most astonishing architectural masterpiece.

North of La Rambla and Plaça Catalunya, you have Passeig de Gràcia, a fancy-like street home to the Gaudí-designed buildings of La Pedrera and Casa Batlló.

The southern edge of La Rambla links to the wooden dock and promenade, which connects to the beach district of La Barceloneta.

Except for some tapa joints in Mercat de la Boqueria, we recommend skipping the restaurants found along La Rambla and instead, exploring the labyrinthine lanes of both El Raval and the Gothic area which are home to several local eateries and restaurants.

On the Gothic side, have a meal at Agut, known for its traditional Catalan cuisine. Neri is slightly more expensive, but it’s a good place for getting a taste of what modern Catalan cuisine is like. For classic Spanish tapas, you will never go wrong in Babia.

On the Raval side, we recommend Arume for Galician food, a northwestern Spanish region famous for its octopus. For a real Spanish experience, go to Bar Cañete, one of the oldest in the area. Those who need a break from Spanish food can pay a visit to the popular burger joint Buenissimo Burger.