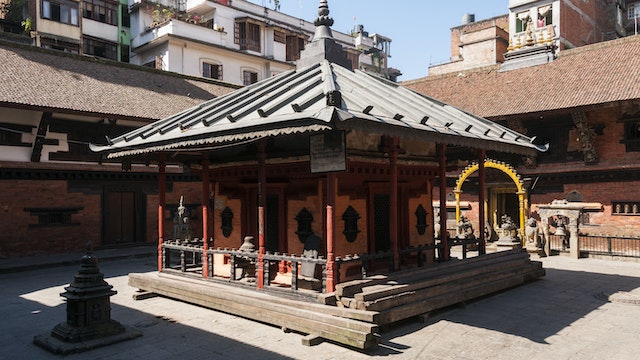 The long, rectangular courtyard of the Itum Bahal is the largest bahal (Buddhist monastery courtyard) in the old town and remains a haven of tranquillity in the chaotic surroundings. On the western side of the courtyard is the Kichandra Bahal, one of the oldest bahals in the city, dating from 1381. A chaitya in front of the entrance has been completely shattered by a Bodhi tree, which has grown right up through its centre.

Inside the Kichandra Bahal (or Keshchandra Paravarta Mahar Bihar) is a central pagoda-like sanctuary, and to the south is a small chaitya decorated with graceful standing bodhisattvas.

On the northern side of the courtyard are four brass plaques mounted on the upper-storey wall. The one on the extreme left shows a demon known as Guru Mapa taking a misbehaving child from a woman and stuffing it greedily into his mouth. Eventually the demon was bought off with the promise of an annual feast of buffalo meat, and the plaque to the right shows him sitting down and dipping into a pot of food. With such a clear message on juvenile misbehaviour it is fitting that the courtyard for many years housed a primary school – right under the Guru Mapa plaques!

To this day, every year during the festival of Holi the inhabitants of Itum Bahal sacrifice a buffalo to Guru Mapa on the banks of the Vishnumati River, cook it in the afternoon in the courtyard and in the middle of the night carry it in huge cauldrons to a tree in the Tundikhel parade ground where the demon is said to live.

In autumn and winter the main square is decorated in ornate swirling patterns of drying grain.