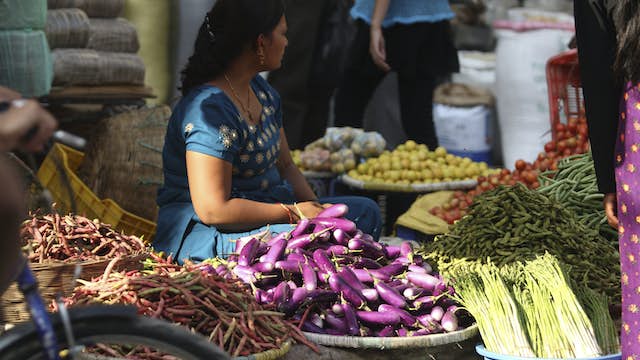 The busy street of Makhan Tole spills into Indra Chowk, the courtyard named after the ancient Vedic deity, Indra. Locals crowd around the square’s newspaper sellers, scanning the day’s news. Indra Chowk is traditionally a centre for the sale of blankets and cloth, and merchants cover the platforms of the Mahadev Temple to the north. The next-door black stone Shiva Temple to the northeast is a smaller and simplified version of Patan’s Krishna Temple.

On the west side of the square is the facade of the Akash Bhairab Temple, or Bhairab of the Sky Temple. From the balcony four metal lions rear out over the street. The temple’s entrance is on the right-hand side of the building, guarded by two more brass lions, but non-Hindus cannot enter. The silver image inside is visible through the open windows from out in the street, and during important festivals the image is displayed in the square. In a small niche just to the left of the Akash Bhairab Temple is a very small but much-visited brass Ganesh shrine.

Before you leave the chowk, look for the market hidden in the alleyways to the east, crowded with stalls selling the lurid beads and bangles that are so popular with married Nepali women.