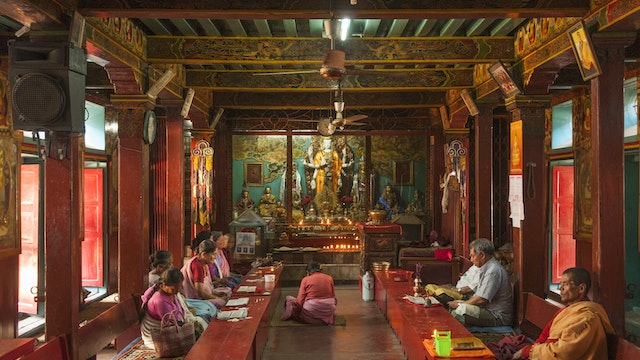 This unique Buddhist monastery is just north of Durbar Sq. It was allegedly founded in the 12th century, and it has existed in its current form since 1409. The temple gets its name from the gilded metal plates that cover most of its frontage and it is one of the most beautiful in Patan.

Entry is via an ornate narrow stone doorway to the east, or a wooden doorway to the west from one of the interlinked courtyards on the north side of Nakabhil.

Entering from the east, note the gaudy lions and the 1886 signature of Krishnabir, the master stonemason who sculpted the fine doorway with its frieze of Buddhist deities. This second doorway leads to the main courtyard of the Golden Temple; shoes and leather articles must be removed to enter the lower courtyard. The main priest of the temple is a young boy under the age of 12, who serves for 30 days before handing the job over to another young boy.

The temple itself is a magnificent example of courtyard temple architecture. Two elephant statues guard the doorway and the facade is covered by a host of gleaming Buddhist figures. Inside the main shrine is a beautiful statue of Sakyamuni (no photos allowed). To the left of the courtyard is a statue of Green Tara and in the right corner is a statue of the Bodhisattva Vajrasattva wearing an impressive silver-and-gold cape. Both are inside inner shrines.

Facing the main temple is a smaller shrine containing a ‘self-arisen’ (swayambhu) chaitya. The four corners of the courtyard have statues of four Lokeshvaras (incarnations of Avalokiteshvara) and four monkeys, which hold out jackfruits as an offering. A stairway leads to an upper-floor chapel dedicated to a white eight-armed Avalokiteshvara, lined with Tibetan-style frescoes including a wheel of life. Finally, as you leave the temple at the eastern exit, look up to see an embossed mandala mounted on the ceiling. Outside of winter, look for the tortoises pottering around the compound – these are the temple guardians.

It’s worth ducking south towards Durbar Sq to see the small, two-tiered Uma Maheshwar Temple and the handsome stone Gauri Shankar Temple, in the Indian shikhara style. Across the road, the Buddhist Maru Mandapa Mahavihar is set in a small courtyard.