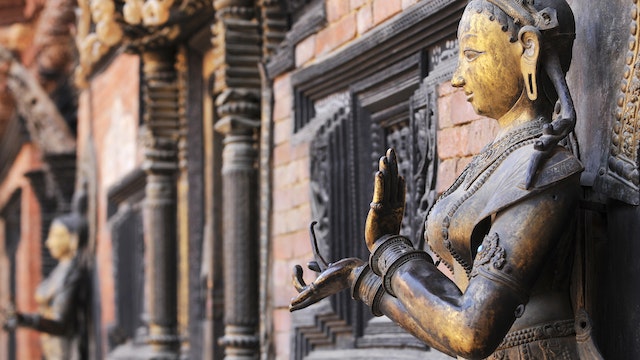 South of the Patan Museum, a gateway opens onto the stately Mul Chowk, the largest and oldest of the Royal Palace’s three main chowk (squares). The original buildings were destroyed by fire in 1662 but rebuilt just three years later by Srinivasa Malla. The temples in the courtyard were restored in 2014 and the surrounding walls and buildings were quickly restored after the 2015 earthquake.

In the centre of the square is the small, gilded, central Bidyapith Temple, beside a wooden post used to secure animals for sacrifices. The central deity is Yantaju, a form of Durga, and a personal deity to the Malla kings.

On the south side of the square is the Taleju Bhawani Temple, flanked by statues of the river goddesses Ganga, on a tortoise, and Jamuna, on a makara. The upper galleries now form part of the museum's architectural displays, with fine examples of carved wooden struts.

At the northeastern corner of the square is the tall Degutalle Temple, topped by an octagonal triple-roofed tower. The larger, triple-roofed Taleju Temple is directly north, looking out over Durbar Sq, and dedicated to Taleju, another protective deity of the Malla kings.