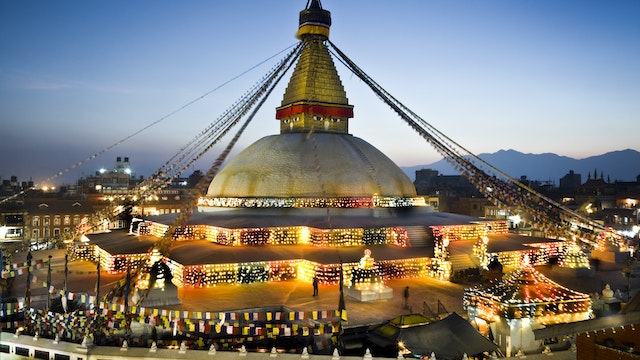 The first stupa at Boudhanath was built sometime after AD 600, when the Tibetan king, Songtsen Gampo, converted to Buddhism. In terms of grace and purity of line, no other stupa in Nepal comes close to Boudhanath. From its whitewashed dome to its gilded tower painted with the all-seeing eyes of the Buddha, the monument is perfectly proportioned. Join the Tibetan pilgrims on their morning and evening koras (circumambulations) for the best atmosphere.

According to legend, the king constructed the stupa as an act of penance after unwittingly killing his father. The first stupa was wrecked by Mughal invaders in the 14th century, so the current stupa is a more recent construction.

The highly symbolic construction serves in essence as a three-dimensional reminder of the Buddha’s path towards enlightenment. The plinth represents earth, the kumbha (dome) is water, the harmika (square tower) is fire, the spire is air and the umbrella at the top is the void or ether beyond space. The 13 levels of the spire represent the stages that a human being must pass through to achieve nirvana.

Stupas were originally built to house holy relics and some claim that Boudhanath contains the relics of the past Buddha, Kashyapa, while others say it contains a piece of bone from the skeleton of Siddhartha Gautama, the historical Buddha. Around the base of the stupa are 108 small images of the Dhyani Buddha Amitabha (108 is an auspicious number in Tibetan culture) and a ring of prayer wheels, set in groups of four or five into 147 niches.

To reach the upper level of the plinth, look for the gateway at the north end of the stupa, beside a small shrine dedicated to Hariti (Ajima), the goddess of smallpox. The plinth is open from 5am to 6pm (till 7pm in summer), offering a raised viewpoint over the tide of pilgrims surging around the stupa. Note the committed devotees prostrating themselves full-length on the ground in the courtyard on the east side of the stupa.