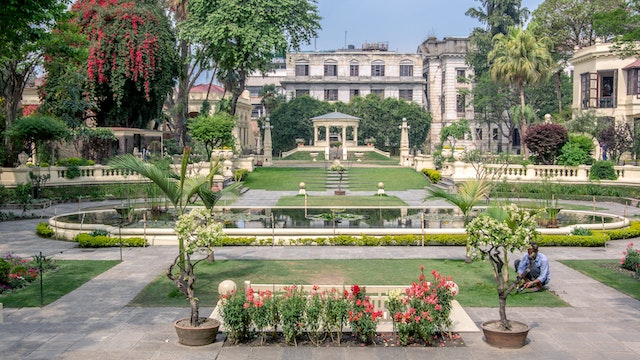 The beautifully restored Swapna Bagaicha (Garden of Dreams) remains one of the most serene and beautiful enclaves in Kathmandu. It's two minutes' walk and a million miles from central Thamel.

Field marshal Kaiser Shamser (1892–1964), whose palace the gardens complement, built the Garden of Dreams in the 1920s after a visit to several Edwardian estates in England, using funds won from his father (the prime minister) in an epic Rs 100,000 game of cowrie shells. The gardens and its pavilions suffered neglect to the point of collapse before they were lovingly brought back to life over a six-year period (finishing in 2007) by the same Austrian-financed team that created the Patan Museum.

There are dozens of gorgeous details in the small garden, including the original gate, a marble inscription from Omar Khayam’s Rubaiyat, the new fountains and ponds, and a quirky ‘hidden garden’ to the south. Of the original 1.6 hectares and six pavilions (named after the six Nepali seasons), only half a hectare and three pavilions remain. To truly savour the serenity, come armed with a book or a picnic to distract you from the amorous Nepali couples and relax on one of the supplied lawn mats. Wi-fi is available (Rs 50 per hour). Dwarika’s hotel operates the serene Kaiser Cafe here and there are occasional cultural events and exhibitions.