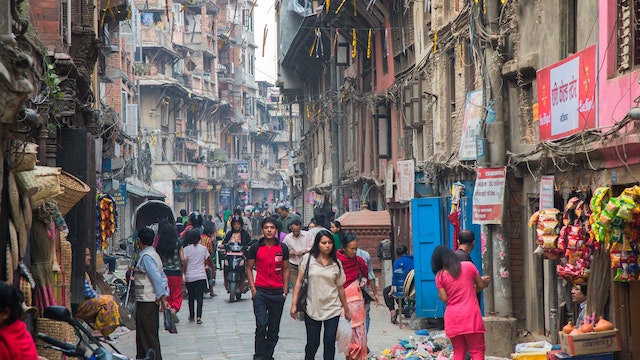 From dawn until dusk the six-spoked junction of Asan Tole is jammed with vegetable and spice vendors selling everything from yak tails to dried fish. It’s the busiest square in the city and a fascinating place to linger, if you can stand the crowds. Cat Stevens allegedly wrote his hippie-era song 'Kathmandu' in a smoky teahouse in Asan Tole.

Every day, produce is carried to this popular marketplace from all over the valley, so it is fitting that the three-storey Annapurna Temple in the southeast corner is dedicated to the goddess of abundance; Annapurna is represented by a silver purana, a bowl full of grain. At most times, but especially on Sundays, you’ll see locals walk around the shrine, touch a coin to their heads, throw it into the temple and ring the bell above them.

Nearby the red-faced Ganesh shrine is coated in bathroom tiles. The historic Yita Chapal (Southern Pavilion), which was once used for festival dances, was damaged in the 2015 earthquake but still stands, supported by buttresses.

On the western side of the square are spice shops. In the centre of the square, between two potted trees, is a small Narayan shrine (Narayan is a form of Vishnu).