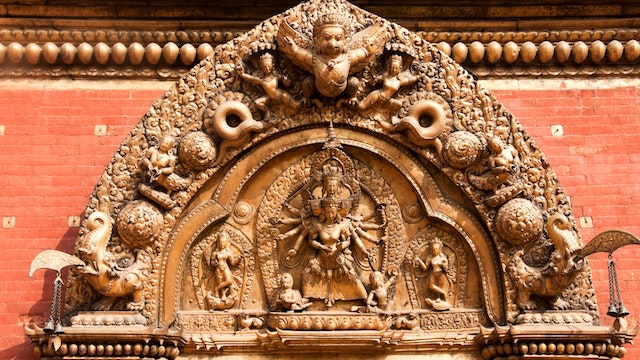 The magnificent Golden Gate is a visual highlight of Durbar Sq. Set into a bright red gatehouse surrounded by white palace walls, the fabulous golden portal boasts some of Nepal's finest repoussé metalwork. The gilded torana features a fabulous Garuda wrestling with a number of supernatural serpents, while below is a four-headed and 10-armed figure of the goddess Taleju Bhawani, the family deity of the Malla kings.

The gate opens to the inner courtyards of the Royal Palace, a once vast compound until the 1934 earthquake levelled all but a handful of its 99 courtyards. More walls toppled during the 2015 earthquake. To the right of the Golden Gate is the 55 Window Palace, which, you guessed it, has 55 intricate wooden windows stretching along its upper level.

As you enter the palace complex, hidden behind grills in the darkness on either side of the inner gate is a pair of enormous war drums, which were used to rouse the city in the event of attack. From here you’ll pass the two statues of traditionally dressed guards standing either side of an ornate door, brought here from Rajasthan.

Continuing on you’ll reach the main entrance to Mul Chowk, the oldest part of the palace and the site of Taleju Temple, built in 1553. Damaged in the quake but not destroyed, it is one of the most sacred temples in Bhaktapur. Only Hindus can enter, but you can peer in and admire its entrance, which is fronted by magnificent woodcarvings. Photography is prohibited.

Continuing on around the corner from Mul Chowk is the Naga Pokhari, a 17th-century water tank used for the ritual immersion of the idol of Taleju. The pool is encircled by a writhing stone cobra and other serpents rise up in the middle and at the end of the tank, where water pours from a magnificent dhara (spout) in the form of a goat being eaten by a makara.