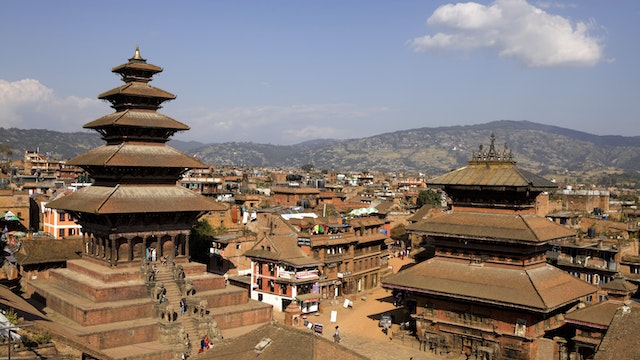 You should be able to see the sky-high rooftop of the Nyatapola Temple long before you reach Taumadhi Tole. With five storeys towering 30m above the square, this is the tallest temple in all of Nepal and one of the tallest buildings in the Kathmandu Valley. This perfectly proportioned temple was built in 1702 during the reign of King Bhupatindra Malla, and the construction was so sturdy that the 1934 and 2015 earthquakes caused only minor damage.

The temple is reached by a stairway flanked by stone figures of the temple guardians. At the bottom are the legendary Rajput wrestlers Jayamel and Phattu, depicted kneeling with hefty maces. Subsequent levels are guarded by elephants with floral saddles, lions adorned with bells, beaked griffons with rams’ horns and finally two goddesses – Baghini and Singhini. Each figure is said to be 10 times as strong as the figure on the level below.

The temple is dedicated to Siddhi Lakshmi, a bloodthirsty incarnation of the goddess Durga (Parvati). The idol of the goddess is so fearsome that only the temple’s priests are allowed to enter the inner sanctum, but less brutal incarnations of the goddess appear on the torana above the door, beneath a canopy of braided snakes, and also on the temple’s 180 carved roof struts. In a classic piece of religious crossover, the Buddhist eight lucky signs are carved beside the temple doorways.

Look for the chariot runners piled up on the north side of the temple.