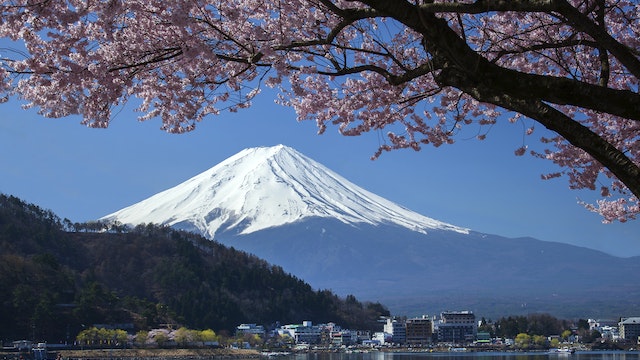 Fuji-san is among Japan's most revered and timeless attractions, the inspiration for generations of poets and the focus of countless artworks. Hundreds of thousands of people climb it every year, continuing a centuries-old tradition of pilgrimages up the sacred volcano (which, despite its last eruption occurring in 1707, is still considered active). Whether or not you don the hiking boots to climb its busy slopes, taking some time to gaze upon the perfectly symmetrical cone of the country’s highest peak is an essential Japan experience.

The old adage about those who climb Fuji once being wise and a second time a fool remains as valid as ever. The hike is not the most scenic in the world, with barren landscapes and a summit that is often shrouded in cloud (obscuring views). Still, the sense of achievement and significance that comes with reaching the top of this sacred peak draws around 300,000 people during the annual climbing season, which runs from 1 July to 31 August – though in recent years this has often been extended to 10 September.

Fuji is divided into 10 concentric ‘stations’ from base (first station) to summit (10th), but most climbers start halfway up at various fifth station points, reachable by road. The most popular climbing route is the Yoshida Trail, because buses run directly from Shinjuku Station to the trailhead at the Fuji Subaru Line Fifth Station (sometimes called the Kawaguchi-ko Fifth Station or just Mt Fuji Fifth Station) and because it has the most huts (with food, water and toilets).

For the Yoshida Trail, allow five to six hours to reach the top and about three hours to descend, plus 1½ hours for circling the crater at the top. The other three routes up the mountain are the Subashiri, Gotemba and Fujinomiya trails; the steepest, Gotemba, is the most convenient to reach for travellers coming from Kansai-area destinations such as Kyoto and Osaka.

Trails below the fifth stations are now used mainly as short hiking routes, but you might consider the challenging but rewarding 19km hike from base to summit on the historic Old Yoshidaguchi Trail, which starts at Fuji Sengen-jinja in the town of Fuji-Yoshida and joins up with the Yoshida Trail.

Trails to the summit are busy throughout the official trekking season. To avoid the worst of the crush head up on a weekday, or start earlier during the day to avoid the afternoon rush and spend a night in a mountain hut (arriving at the summit for dawn, which can offer great views if there’s no cloud!).

Authorities strongly caution against climbing outside the regular season, when the weather is highly unpredictable and first-aid stations on the mountain are closed. Despite this, many people do climb out of season, as it's the best time to avoid the crowds. During this time, climbers generally head off at dawn, and return early afternoon – however, mountain huts on the Yoshida Trail stay open later into September when weather conditions may still be good; a few open the last week of June, when snow still blankets the upper stations. It's highly advised that off-season climbers register with the local police department for safety reasons; fill out the form at the Kawaguchi-ko or Fuji-Yoshida Tourist Information Centers.

If you plan to hike, go slowly and take regular breaks to avoid altitude sickness. Hiking poles are a good idea to help avoid knee pain (especially during the descent).

From the Fifth Stations up, dozens of mountain huts offer hikers simple hot meals in addition to a place to sleep. Most huts allow you to rest inside as long as you order something.

Conditions in mountain huts are spartan (a blanket on the floor sandwiched between other climbers), but reservations are recommended and are essential on weekends. It's also important to let huts know if you decide to cancel at the last minute; be prepared to pay to cover the cost of your no-show. Good choice mountain huts include Fujisan Hotel, Higashi Fuji Lodge and Taishikan.

Camping on the mountain is not permitted, other than at the designated campsite near the Fuji Subaru Line Fifth Station (aka Kawaguchi-ko Fifth Station).

Permits are not required to climb Mt Fuji