in Tridente, Trevi & the Quirinale 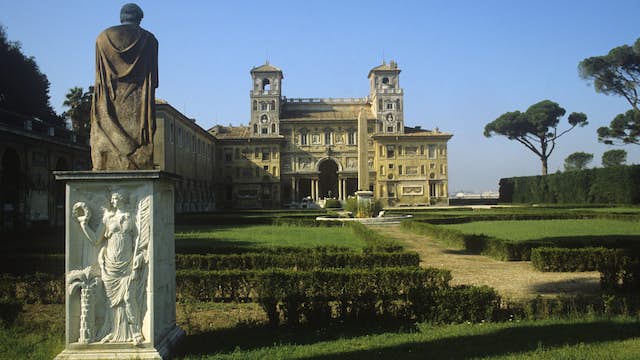 Built for Cardinal Ricci da Montepulciano in 1540, this sumptuous Renaissance palace was purchased by Ferdinando de' Medici in 1576 and remained in Medici hands until 1801, when Napoleon acquired it for the French Academy. Guided tours (1½ hours) in multiple languages take in the sculpture-filled gardens and orchard, a garden studio exquisitely frescoed by Jacopo Zucchi in 1577 and the cardinal's private apartments. Note the pieces of ancient Roman sculpture from the Ara Pacis embedded in the villa's walls.

The villa's most famous resident was Galileo, imprisoned here between 1630 and 1633 during his trial for heresy. These days its outbuildings house artists' studios offered to French-speaking artists and scholars for one-year residencies – needless to say, these are highly sought-after.

Regular temporary exhibitions are staged here, entry to which is included in your ticket.