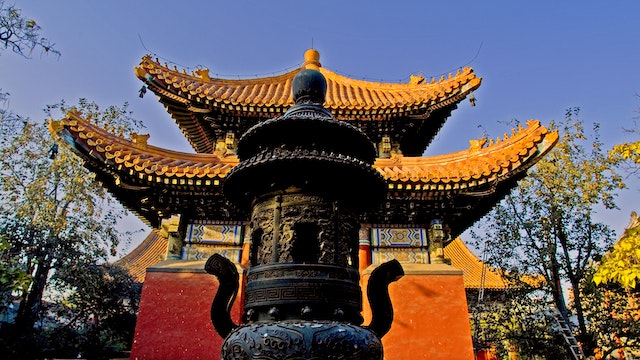 Converted from a princely residence to a lamasery in the 18th century, the Lama Temple extends through a crescendo of ever more divine halls in a whirl of incense and prayer wheels to its astonishing finale, an 18m-high statue of Buddha carved from a single trunk of Tibetan sandalwood. Expect to spend at least an hour wandering the halls and courtyards, admiring the architecture, statues, wall-mounted mandalas and temple relics on show throughout.

The most revered Tibetan Buddhist temple outside Tibet, the Lama Temple was originally the royal residence of the prince who would become the Yongzheng emperor, hence the yellow roof tiles on its central halls. While it remains an active place of worship staffed by monks, the temple is today visited mostly by tourists.

Arranged on a north–south axis, the temple halls ascend in height and importance as you move through the complex. The Hall of the Wheel of the Law (Fǎlún Diàn), the fourth hall, contains a substantial bronze statue of a benign and smiling Tsongkhapa (1357–1419), founder of the Gelug school or Yellow Hat sect.

The fifth hall, the Wanfu Pavilion (Wànfú Gé), reveals an awe-inspiring, 18m-tall statue of the Maitreya Buddha in its Tibetan form, clothed in yellow satin and reputedly carved from a single trunk of Tibetan sandalwood. The statue was a gift from the seventh Dalai Lama to the Emperor Qianlong, and took three years to be transported from Lhasa to the capital. A further 8m of the statue is concealed below ground.

The two rearmost side halls, Jietai Lou and Banchan Lou, are given over to changing displays of religious relics and treasures from the temple, served up with a tendentious account of China's relationship with Tibet and Tibetan Buddhism.