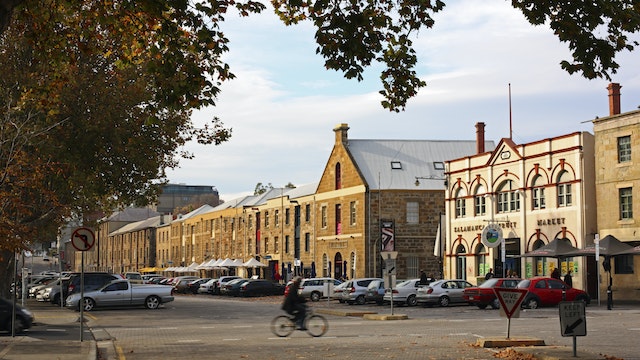 This picturesque row of three- and four-storey sandstone warehouses is a classic example of Australian colonial architecture. Dating back to the whaling days of the 1830s, Salamanca Pl was then the waterfront – goods were winched from the upper levels of the warehouses directly onto ships. By the mid-20th century many of the warehouses had fallen into ruin, before restorations began in the 1970s. These days Salamanca hosts myriad restaurants, cafes, bars and shops, and the unmissable Saturday Salamanca Market.

Behind the warehouses, Salamanca Sq fills an old quarry, while at the eastern end of Salamanca Pl, the conversion of four old wheat silos into plush apartments has also been a hit.

Operating behind the scenes is a vibrant and creative arts community. The nonprofit Salamanca Arts Centre occupies seven Salamanca warehouses, home to around 60 arts organisations and individuals, including shops, galleries, studios, performing-arts venues and versatile public spaces. Check the website for happenings.