The United States is home to more than its fair share of iconic, bucket list–worthy views, but even so, there are plenty of unexpected panoramas just waiting to be discovered. Featuring knockouts both natural and human-made, here are six of the most underrated vantage points in America.

Dubbed the Grand Canyon of the East, the gorge at the heart of Letchworth State Park covers significantly less ground than its counterpart in Arizona – its cliffs only rise 600ft at their highest point, as opposed to the mile-deep drop of the original out west – but what the Western New York canyon lacks in square footage it makes up for in natural beauty. The Genesee River, flows through the gorge and over dozens of waterfalls, the highest of which tops out at 350ft, making it the tallest in the state – higher even than Niagara. Just about equidistant from Buffalo and Rochester, the park also boasts 66 miles of hiking, trails for biking, horseback riding, and cross-country skiing, and river access for kayaking and whitewater rafting.

On paper, it doesn’t sound like much – just a huge stone rising out of the Pacific Ocean off the Oregon Coast – but in person, it becomes clear why Haystack Rock is one of the state’s must-sees. The 235ft-tall basalt sea stack looms over Cannon Beach, its imposing silhouette serving as a backdrop for shoreline fun and wildlife-watching, not to mention some truly spectacular sunsets. And the natural landmark is just as captivating up close, both on the surface and below the waterline: tufted puffins nest there from early spring through mid-summer and bald eagles hunt in the vicinity, while tidepools at its base showcase colorful marine creatures like sea stars, anemones, crabs, and coral.

Rocky Mountain National Park is the crown jewel of Colorado’s public lands, and it pulls focus accordingly for visitors and locals alike. But the southwest portion of the state is just as deserving of attention, and Mesa Verde, a national park devoted to the archaeological heritage of the Ancestral Puebloan people, makes a particularly eye-catching alternative. Perched on a plateau around 8500ft, with Cliff Palace – North America’s largest extant cliff dwelling – nestled into a rock wall below, the park comprises thousands of archeological sites, including hundreds of cliff dwellings that provide a jaw-dropping look at local life circa 600 to 1300 CE.

Best for: BASE jumpers, bridge-lovers

Once the longest steel arch bridge in the world and currently the longest single-span steel arch bridge in the country, the New River Gorge Bridge stretches 3030ft across West Virginia’s New River, an ancient waterway etching out a path through the Appalachian Mountains. Located near Fayetteville in the New River Gorge National River, the bridge was a feat of engineering and construction when it was completed in 1977, and today its 88 million pounds of steel and concrete offer epic views from behind the wheel. (For gorgeous scenery sans driving stress, plan a hike to the rim, or visit on Bridge Day, an annual festival that opens things up to pedestrians, spectators, and BASE jumpers taking the plunge.)

You’ve met the Grand Canyon of the East, now say hello to the Niagara of the West. Situated in Twin Falls, Idaho, and stretching 900ft wide and 212ft high, Shoshone Falls is taller than its Atlantic Coast counterpart, though the Snake River sends over much less water here – at most, around 20,000 cubic feet of water per second – than the Niagara does in high season. Still, it’s an impressive sight that’s been a Gem State attraction since the mid-19th century, when it offered weary travelers respite from the Oregon Trail, and today the falls are as popular as ever, ensconced in a city park and open to the public for a mere fiver per car.

When you think of scenic vistas, it’s not often that caves come to mind, but from California’s Carlsbad Caverns to the Mammoth Cave system in Kentucky, the American underground is chock-full of geologically-stunning grottos. Just north of Redding, about two hours from the Oregon border, Lake Shasta Caverns is a national natural landmark practically bursting with unique calcite formations. Combining subterranean splendor with beauty above ground, the caves are reachable only by boat – a catamaran trip across the state’s largest reservoir, its crystal-clear waters surrounded on all sides by mountainous terrain – bookending the adventure with knockout views from start to finish.

This article was first published November 2020 and updated October 2021 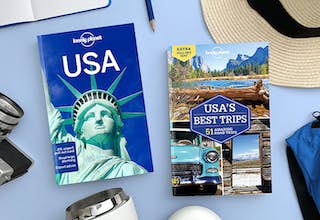 Make the most of your time in the USA with Lonely Planet’s range of travel guides. Be the architect of your own trip as you discover the best things to do in the USA through insider tips, suggested itineraries and handy maps.