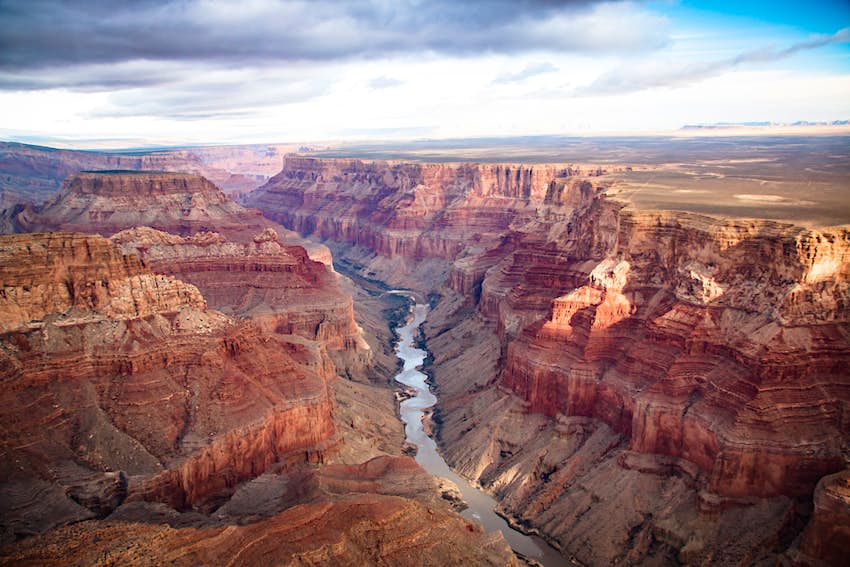 The USA packs spectacular biodiversity within its borders, boasting some of the most beautiful places in America. Within the 50 states, you’ll encounter  incredible natural landmarks like hot desert playas and plateaus, skyscraping mountain ranges topped by glaciers, rolling grasslands where millions of bison once roamed, tropical rain forests, active volcanic zones and polar tundra.

Many of the USA's most magnificent natural wonders are protected today by the National Park Service (NPS). These specially protected places also provide safe haven for an astonishing array of wildlife, ranging from tiny eyeless fish living in the dark haunts of Mammoth Cave to the giant grizzly bears of wild Denali National Park. If you want to have your mind blown, visit the USA's top 10 natural wonders, scattered from coast to coast and beyond.

Measuring a mile deep, up to 18 miles wide and more than 275 miles long, no other sight in the USA beats this giant hole in the ground for instilling stupefying awe. Peering over the edge of the Grand Canyon is enough of a thrill for some, but to really appreciate the canyon’s grandeur, hike all the way down inside it to the rushing Colorado River.

Top tip: To escape the crowds, visit the canyon’s North Rim, which gets one tenth as many visitors as the South Rim. Note that the North Rim is now closed for the 2020 season.

Top tip: Yosemite Valley’s waterfalls peak in late spring, which is a less hectic time to visit the park than during summer.

The world’s tallest trees grow on the fog-kissed Northern California coast. Redwoods can reach a height of 379ft, taller than the Statue of Liberty in NYC, and live for up to two millennia. Almost half of all the old-growth redwood trees remaining that have never been logged are protected by the chain of Redwood National and State parks.

In the indigenous Koyukon Athabaskan language, it means ‘the high one,’ which is fitting because Denali is North America’s highest peak (20,310ft). Prominently poised above the surrounding wilderness, it’s in fact taller than Everest when measured from its base. Climbers first reached the south summit in 1913, a feat now attempted by more than a thousand people every year.

Niagara Falls is not just one, but three waterfalls that gush along the US-Canada boundary between New York and Ontario: Horseshoe Falls, American Falls and Bridal Veil Falls. They aren’t the USA’s tallest waterfalls, but together these powerful cascades have a bigger water flow than any others on the planet. Get up close and feel the cool spray on a Maid of the Mist boat tour.

Top tip: The Canadian side of the falls claims more natural beauty, so bring your passport for international border crossings.

Yellowstone is the USA’s oldest national park and is a wonderland of unique geology and wildlife. At this Unesco World Heritage Site and Biosphere Reserve, you’ll be amazed by the world’s largest collection of geysers and hydrothermal features, including hot springs, boiling mud pots and steaming fumaroles. Look for herds of bison roaming free alongside the park’s main roads.

Top tip: Vacationing here during early fall avoids some of the biggest crowds, but be prepared for freezing overnight temperatures and, possibly, snowfall.

In America’s heartland, aptly named Mammoth Cave is the world’s longest cave system. Almost 400 miles of underground passageways have been explored (so far, that is) inside this limestone karst cave labyrinth sculpted by subterranean rivers. See oddly shaped stalactites, stalagmites and other impressive speleothems (cave formations) on a lantern-lit cave tour.

Top tip: Bring a sweater or a jacket, since temperatures inside the cave average 54°F (12°C).

On the wind-blown, tide-splashed Atlantic coast, Acadia is a maritime treasure. Don’t miss hiking Cadillac Mountain (1530ft), the tallest peak on the Atlantic seaboard. On New Year’s Day, you can be the first person in the USA to see the sunrise from its summit. For equally stunning panoramas, show up for golden leaf peeping in autumn.

Top tip: Rent bicycles in Bar Harbor, or bring your own bicycles to explore the park car-free.

Chances are that those epic landscapes you’ve seen in classic Hollywood Westerns were shot in Monument Valley, where startling sandstone buttes rise up to 1000ft above the sandy desert floor. Today the valley is a Navajo tribal park. For a grand sense of perspective, sign up for a guided horseback tour.

On Hawaiʻi, the Big Island, Kilauea Volcano has been oozing red-hot lava since 1983, making this one of the world’s longest continuous volcano eruptions. Nowhere else in the country can you see geological forces birthing new land like here at Hawaiʻi Volcanoes National Park, a Unesco World Heritage site. According to Hawaiian tradition, the fiery lava lake in Halemaʻumaʻu Carter is the home of Pele, goddess of fire and volcanoes.

This article was originally published in October 2018 and was last updated September 2020.