The 10 tastiest insects and bugs in Mexico

Once you get over the ew of eating spicy grasshoppers or a creamy winged-ant salsa, you’ll find some high-protein cuisine that is organic and definitely tasty. Really. For centuries it wasn’t meat that sustained Aztec warriors but protein-rich, fat-free stink bugs, mescal worms and fly eggs. Mexico has the world’s highest number of edible insects and many of them aren’t all that odd when you sit them alongside caviar, prawns and escargot. Here are the most common edible bugs in Mexico and where to sample them.

This is the ultimate gateway bug. It's found in alcohol, and we know that drunk people will eat almost anything and call it dinner. Especially when gusanos taste a little like French fries or umami (that moreish Japanese ‘fifth taste’).

The grubs lie at the bottom of mescal bottles, as though in science-lab pickling jars from another century. Mescal is made from the maguey plant, and gusanos are grubs that feed on the aloe-vera-like leaves. They're added to the mescal bottles as a gold (sometimes red) seal of authenticity; to get just a few gusanos, the maguey plant has to be killed off.

Their plump drunken bodies filter the mescal and taste of Mexican earthiness. Some swear by their aphrodisiac qualities; and surely by the time you've hit the bottom of a bottle of potent mescal, you’ll probably be feeling quite amorous already.

If you're not convinced about their aphrodisiac properties, then gulp down a gusano for its high levels of protein, like they did in Mexico centuries before the Spanish arrived.

Those shy of the full worm can sprinkle their steak in sal de gusano, a mix of salt and desiccated gusanos. Or, for a swankier meal, try pan-fried gusanos with a side serving of guacamole at Tirol in Tlaxcala. 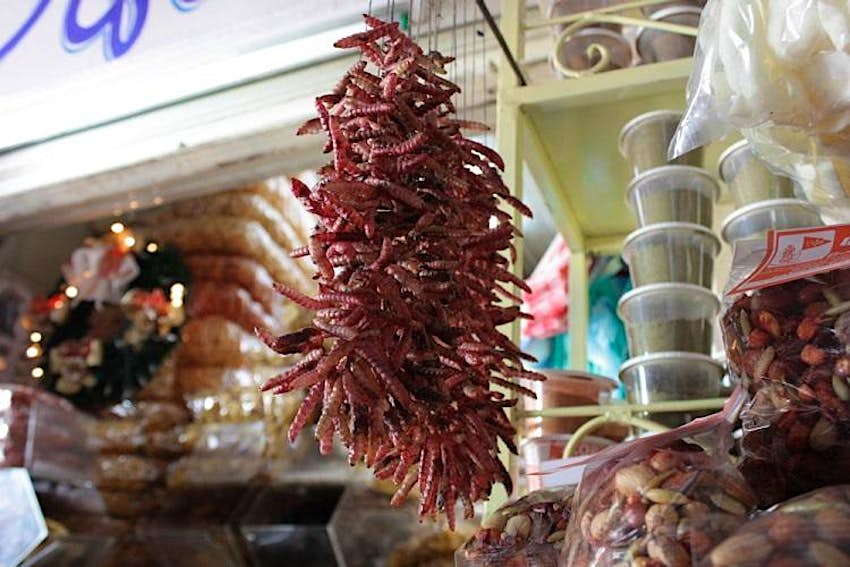 Tantalising or terrifying? A bouquet of gusanos in Mercado La Merced in Oaxaca.  Image by Krista / CC BY 2.0.

If you don't like the idea of live bugs crawling around in your mouth, stop reading now. In the once silver-rich town of Taxco, south of Mexico City, jumiles are plucked from their mountain homes, sprinkled into a taco and doused in lime. As you bite in, they can continue to scamper: even when headless, these scarab-beetle-like bugs writhe around, so you might need a strong tequila chaser to wash down their ticklish feet. They have a strong flavour like a cocktail of mint and cinnamon, and can be both slightly sweet and bitter (think fresh green bark). The strong odour they let off will be enough to keep many from trying them, but that same chemical might be the secret of their famed analgesic effect. Now that you’re getting more comfortable with the idea, here's one other thing to let you in on – jumiles can fly.

When jumiles are in season, try a dish of them at Pozolería Tía Calla in Taxco.

When the first rains of the season hit Oaxaca, ants with coin-size wing spans spin into the air to escape their flooded nests and to search for food. Snatching at them are the hands of locals seizing their next snack. Chicatanas only come out one night a year, so families come together with a sense of urgency and excitement; kids make a game of seeing who can collect the most (and avoid getting bitten).

Locals pan-roast the fat red ants with lime, which gets rid of their heads and silvery wings. Eating a whole chicatana can be a mouthful, so the Oaxacans grind them into a paste with chili, salt and garlic in a molcajete (pre-Hispanic stone mortar and pestle). This traditional Oaxacan spicy mole or salsa de chicatanas (a smoky sauce that resembles tahini, with an earthy, charred flavour) is spread liberally onto a tortilla. You can try giant winged-ant sauce for yourself at Casa Oaxaca in Oaxaca City.

In Puebla, there is an excitement as March approaches: the beginning of escamole season. Outside Mexico, caviar is prized and used as a byword for expensive cuisine. But in stately Puebla, it's not the larvae of fish that make mouths water but that of ants. There is a longing for the buttery nutty flavour of the eggs, sautéed with garlic, onion and butter, which burst in the mouth. Spare a thought for the ants, whose homes are torn from the roots of the tequila-making agave, or mescal-making maguey, plants.

Fonda de Santa Clara (fondadesantaclara.com), a fine restaurant lined with talavera (artesanal tiles), is where you can dine on escamoles from March to May. It also serves dishes with gusanos and chapulines. Or grab some escamoles to go with your gusanos in Tirol, Tlaxcala. For a street version of escamoles, locals turn to the trusty taco, pasted together with a spicy guacamole. The soft ant eggs look like risotto from afar, and have a cottage-cheese consistency on the palate. 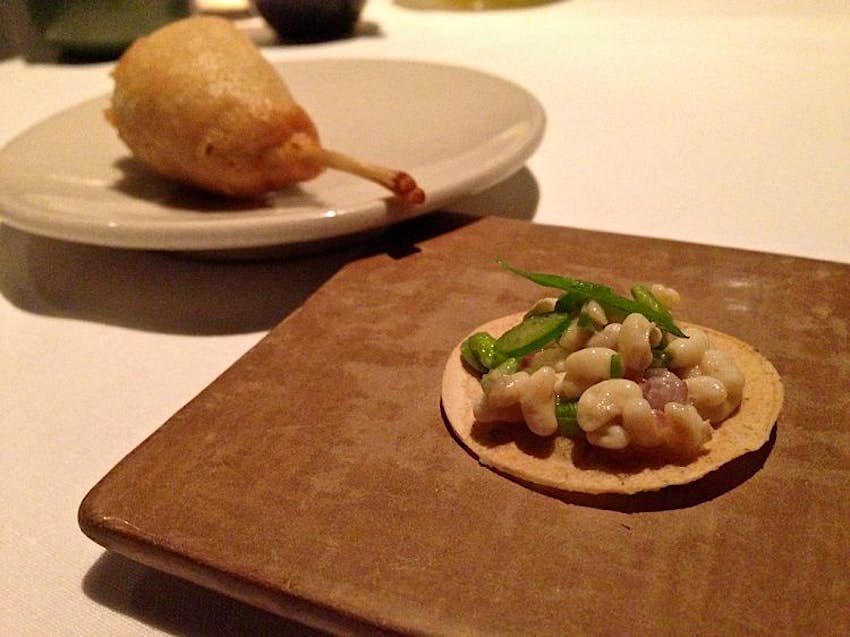 Also known as ‘Aztec caviar’, ahuatle is another pre-Hispanic food made from insect eggs, with over 500 years of history. The water-fly larvae are somewhat seafood leaning, with a flavour that resembles shrimp paste. They also register a healthy 93% of protein per serving.

You can find ahuatle as an ingredient to cook up from Mercado de la Merced in Mexico City, or as a street snack from roaming vendors on the edges of Mexico City in Iztapalapa and Xochimilco. Or sit down to a meal of ahuatle in white-cheese croquettes with a red mole (spiced sauce) at Restaurante Chon, where other edible insects are also on the menu.

The dried cuchamás (green caterpillars) represent more to the people of Zapotitlán than a mere grub. They are a generations-old source of income for those who pick the caterpillars from green shrubs in desertlike towns and sell them at markets. This trade has existed for centuries between the Popolocas and the Nahuatl peoples of the region. Today the finger-length caterpillars are collected in Zapotitlán Salinas to be sold 100km away in the market at San Sebastián Zinacatepec in Puebla. There they are measured in clay scoops, and are a crispy fast snack.

And, of course, they’re a taco filling – cholesterol free and low in fat, unlike the usual meatier street tacos. If you prefer your caterpillar to have more flavour, you can dry fry them with chile de arbol (bird's-eye chilli), lime and onion.

Fans of eating dried grasshoppers say that they’re clean insects because they never touch the ground, they just leap from one leaf to another. Maybe that’s why Mexicans munch on chapulines more than any other edible insect. You can find snackable grasshoppers all over Mexico – in dressy bars or piled up in sacks alongside peanuts on the roadside. They’re nearly always doused in a mild chili powder and lime juice and contain nearly as much protein as salmon.

In Mexico City, visit the young and hip La Clandestina in Roma Norte, where salty chapulines are olive-oil fried and come overflowing in small bowls. The crispy grasshoppers have a herby flavour, but look out for their serrated feet, which can catch on your lip. The mescal at La Clandestina (sourced from microbreweries) washes them down nicely. Finish it all off with a slice of orange dusted in chili powder. 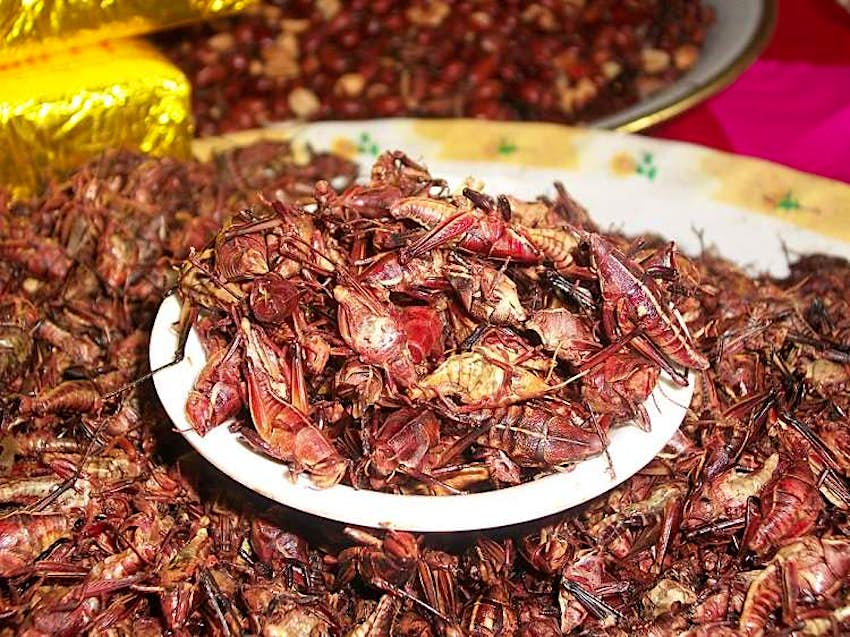 A feast fit not for the faint-hearted. A bowl of chapulines. Image by Jesus Rafael Lopez Ibarra / CC BY-SA 2.0.

In the Yucatán Peninsula, home to tropical Cancún, locals lay bowls of water at the feet of their beds to stop these flat black scorpions from giving dreamers a stinging, burning wake-up call. Few locals actually eat the trapped scorpions and you’re more likely to find them in a modern spin on blocky lollipops. If you can get past the flavoured clear candy, you'll find that the alacránes have a woody taste.

That ever-magic mix of lime and salt adds a simple flavouring to the larvae of these four-winged insects in Sonora in the very north of Mexico. You can eat them fried or simply dried with a shot of tequila. Saying you are eating dragonflies sounds almost magical, though perhaps also harsh and unsustainable.

There are 88 species of edible beetles in Mexico. Colourful names include the rhinoceros beetle and gallina ciega (blind hen), which is actually a white beetle grub that resembles an oversized maggot.

The most common edible beetle is the chahui, which feeds on the bean pods of the desert-growing mesquite tree (as do coyotes). The chahui has a bitter flavour that disappears when roasted well, giving way to an almost fishy flavour.

Escarabajos are a delicacy in Hidalgo, Tabasco, Guerrero, Veracruz, Oaxaca, Puebla, Chiapas and Nayarit. Follow your tastebud curiosity to one of these many places, where you'll find even local children eating beetles, happily putting aside ew for mmm.

Phillip Tang will try eating anything once. Twice, if it's covered in chilli and lime. Follow his rants and GIFs about technology and travel from his current home, Mexico City on Twitter @philliptang.

How to get to the six best beaches near Istanbul

Who needs a visa to travel to Singapore? Here's what to know before you go

4 min read • Published about 8 hours ago

Why Fiji is the perfect destination when traveling with kids