How to get around in Greece 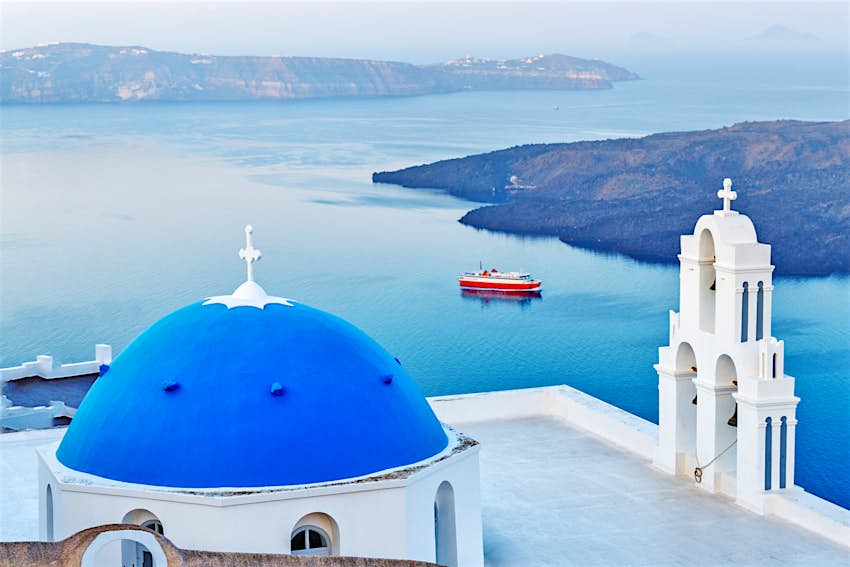 From ferries to buses, trains to bikes, there are many ways to explore Greece © Ihor_Tailwind / Getty Images

Think of traveling in Greece and your mind will likely wander to images of ferries cruising across the turquoise Aegean Sea. Taking to the water is essential for hopping between the country’s islands, but there are plenty more ways to traverse Greece’s amazing landscapes, including trains, buses and – if you have the leg power – bike.

Here’s our guide to getting around in Greece.

The railway network in Greece, operated by OSE, is pretty limited, and lines have closed in recent years in areas such as the Peloponnese. That said, trains still make for an enjoyable and relaxed way to explore a good chunk of the Greek mainland.

The main line is the northern line service, which runs from Athens to Dikea in the northeast via Thessaloniki and Alexandroupoli. There are also connections to Florina, near the North Macedonia border, and the Pelion Peninsula. The Peloponnese network runs only as far as Kiato, with bus services to Plata for ferry connections.

There are two types of service: regular (slow) trains that stop at all stations, and faster, modern intercity (IC) trains that link most major cities. Train fares have increased dramatically since the Greek economic crisis but are comparable with the rest of Europe. The carriages of the inter-city trains are modern and comfortable, with a cafe-bar on board.

Prices and schedules are very changeable – double-check on the (slightly confusing) OSE website before traveling.

Though not the most glamorous way to get around, buses are cheap and convenient, and the network in Greece is comprehensive.

All long-distance buses on the mainland and the islands are operated by regional collectives known as KTEL. Each KTEL independently operates local services within it and runs buses to the main towns of other prefectures.

All major towns will usually run daily services to nearby cities and, on the mainland, a service to Athens. Most villages have a daily bus service of some sort, although remote areas may have only one or two buses a week. They operate for the benefit of people going to town to shop, rather than for tourists, and consequently leave the villages very early in the morning and return early in the afternoon.

It is important to note that big cities like Athens, Iraklio, Patra and Thessaloniki may have more than one bus station, each serving different regions. Make sure you find the correct station for your destination. In small towns and villages the "bus station" may be no more than a bus stop outside a kafeneio (coffee house) or taverna that doubles as a booking office.

The KTEL buses are safe, modern and air-conditioned. In more remote, rural areas they may be older and less comfortable. You can board a bus without a ticket and pay onboard, but on a popular route or during high season, you may have to stand. As a rule of thumb, try to turn up for your bus around 20 minutes before departure.

Nothing quite says traveling in Greece like standing on the deck of a ferry with the sun on your face. Ferries are the classic way to traverse the country, with connections between islands and the mainland during the summer months.

Boats range from the zippy catamaran variety to the slower, larger overnight ferry with cabins on board. Schedules are often subject to delays due to poor weather (note: this is a safety precaution) plus the occasional industrial action, and prices tend to fluctuate. In summer, ferries run regular services between all but the most out-of-the-way destinations; however, services seriously slow down in winter (and in some cases stop completely).

Timetables are not announced until just before the season as companies compete for routes annually, meaning different boats run different services each year. Some major companies include Aegean Flying Dolphins, Aegean Speed Lines, Blue Star Ferries and Fast Ferries. Most outfits have local offices on many islands, and it’s usually worth booking ahead in high season when possible.

The country's national carrier Aegean Airlines and its subsidiary, Olympic Air, handle the vast majority of domestic mainland flights. You'll find offices wherever there are flights, as well as in other major towns. There are also several smaller Greek carriers, including Sky Express. A number of the larger Greek islands have airports.

There are discounts for return tickets for travel between Monday and Thursday and bigger discounts for trips that include a Saturday night away. Find full details and timetables on airline websites.

Having your own car or motorcycle offers the freedom to get off the beaten track and explore Greece at your own pace. The road network has improved enormously in recent years, as has the country’s road safety record. There are regular (if costly) car-ferry services to almost all islands too.

However, Greece’s road fatality statistics are still notably higher than the rest of Europe, and drivers should be extra cautious behind the wheel. A growth in rental places has also seen some parts of the country, particularly some popular islands, become overrun with hire vehicles, bringing problems around parking and congestion in island towns. Heading off to lesser-visited spots, or visiting outside of peak season, are two good ways to avoid adding to this issue.

When it comes to hiring a car, all the big multinational companies, including Avis, Budget, and Europcar, are represented in Athens; most have branches in major towns and popular tourist destinations. The majority of islands have at least one outlet. High-season weekly rates with unlimited mileage start at about €280 for the smallest models, dropping to about €150 per week in winter. You can rent a car on the islands for the day for around €35 to €60, including all insurance and taxes. Local companies often offer better deals than the big multinationals, especially if business is slow.

As for motorcycles and scooters, these – often along with quad bikes – tend to be available to hire wherever there are tourists to rent them. Most machines are newish and in good condition. Nonetheless, check the brakes at the earliest opportunity.

Rates start from about €20 per day for a moped or 50cc motorcycle, ranging to €35 per day for a 250cc motorcycle. Out of season these prices drop considerably, so use your bargaining skills. You must produce a licence that shows proficiency to ride the category of bike you wish to rent; this applies to everything from 50cc up. Helmets are compulsory. Expect gravel roads, particularly on the islands; scooters are particularly prone to sliding on gravelly bends.

Cycling is not a particularly common mode of transport in Greece, but it's gaining popularity. You'll need strong leg muscles to tackle the mountains, or you can stick to some of the flatter coastal routes. The island of Kos is the most bicycle-friendly place in the country.

That said, cycling infrastructure nationwide is generally not the best. Bike lanes are rare to non-existent, and there is a real danger from cars – locals and tourists alike. Vigilance is necessary on busy roads, which should be avoided as much as possible.

A perk of traversing Greece on two wheels is that bicycles are carried free on ferries, though they cannot be taken on the faster catamarans and the like, as there simply isn't room to store them.

You can hire bicycles in most tourist places, but they are not as widely available as cars and motorcycles. Prices range from €10 to €15 per day, depending on the type and age of the bike. Alternatively, you can buy decent mountain or touring bikes in Greece's major towns, though you may have a problem finding a ready buyer if you wish to sell it on.

Access for travelers with disabilities has improved somewhat in recent years, though mostly in Athens, where there are more accessible sights, hotels and restaurants. Much of the rest of Greece, with its abundance of stones, marble, slippery cobbles and stepped alleys, remains inaccessible or difficult for wheelchair users. People who have visual or hearing impairments are also rarely catered to. Careful planning before you go can make a world of difference.

Some good resources for accessible travel in Greece include Travel Guide to Greece, which has links to local articles, resorts and tour groups catering to tourists with physical disabilities, DR Yachting, which offers two-day to two-week sailing trips around the Greek islands in fully accessible yachts, and Sirens Resort, a family-friendly resort with accessible apartments, tours and ramps into the sea.

You might also like:
12 essential places to visit in Greece
Best time to go to Greece
Introducing Greece’s national parks

9 min read • Published about 20 hours ago