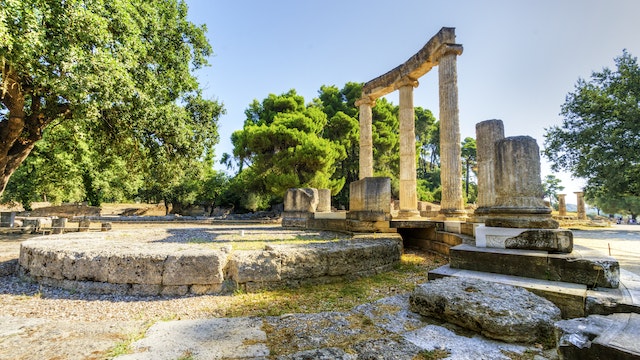 This is where the Olympic Games took place every four years for over 1100 years, until their abolition by Emperor Theodosius I in AD 393. The Olympic flame is still lit here for the modern Games. Thanks to the destruction ordered by Theodosius II in AD 420 and various subsequent earthquakes, little remains of the magnificent temples and athletic facilities, but enough exists to give you a hint of the sanctuary's former glory.

It is one of Greece's most evocative ancient sites. Wandering amid the tree-shaded ruins, you can almost picture the blood and smoke of oxen sacrificed to Zeus and Hera, the sweaty, oiled-up athletes waiting inside the original stadium and the raucous crowds waiting to see the action unfold.

According to one (of many different) legends, Zeus held the first Olympic Games to celebrate beating his father Kronos at wrestling. Archaeologists, however, date the oldest structures in the ancient complex to around 2000 to 1600 BCE, while records show the first known games – the athletic contest was originally part of a wider festival honouring Zeus – took place on the site in 776 BCE. It's worth remembering that some structures precede others by centuries; a visit to the excellent archaeological museum (as well as the Museum of the History of the Olympic Games in Antiquity) before or after will provide context and help with visualising the ancient buildings.

On your right as you descend into the complex, the first ruin encountered is the gymnasium, which dates from the 2nd century BC. South of here are the columns of the partly restored palaestra (wrestling school), where contestants practised and trained.

Beyond here is Pheidias’ workshop, where the gargantuan ivory-and-gold Statue of Zeus, was sculpted by the Athenian master. The statue, one of the Seven Wonders of the Ancient World, stood in the Temple of Zeus (in The Altis) but was destroyed in the 5th century – its existence is known only through ancient texts and its representation on coins. The workshop was identified by archaeologists after the discovery of tools and moulds; in the 5th century AD it was converted into an early-Christian church.

The Altis, or Sacred Precinct of Zeus, lies on the left of the entrance path. Its most important building was the immense 5th-century-BC Doric Temple of Zeus, which enshrined Pheidias’ statue. One column of the temple has been restored and re-erected, and helps put into perspective the sheer size of the structure. To the east of the temple is the base for the Nike (Victory statue) that visitors can admire in the archaeological museum.

The altar of oaths

South of the Temple of Zeus is the bouleuterion (council house), which contains the altar of oaths, where competitors swore to abide by the rules decreed by the Olympic Senate and not to commit foul play. Here were kept the official records of the Games and its champions.

The stadium lies to the east of the Altis and is entered through a stone archway. It is rectangular, with a track measuring 192.27m; the stone start and finish lines of the sprint track and the judges’ seats still survive. The stadium could seat at least 45,000 spectators; slaves and women, however, had to be content to watch from outside on the Hill of Kronos. The stadium was used again in 2004, when it was the venue for the shot put at the Athens Olympics.

To the north of the Temple of Zeus, past the pelopion (a small, wooded hillock with an altar to Pelops, the first mythical hero of the Olympic Games), is the late 7th-century-BC Doric Temple of Hera, the site’s oldest temple. An altar in front of the temple would have maintained a continuous fire during the Games, symbolising the fire stolen from the gods by Prometheus; today, the Olympic flame is lit here.

It is worth visiting first thing in the morning or in the late afternoon; it's a magical experience to be there without the crowds. Information panels are in Greek, English and German.