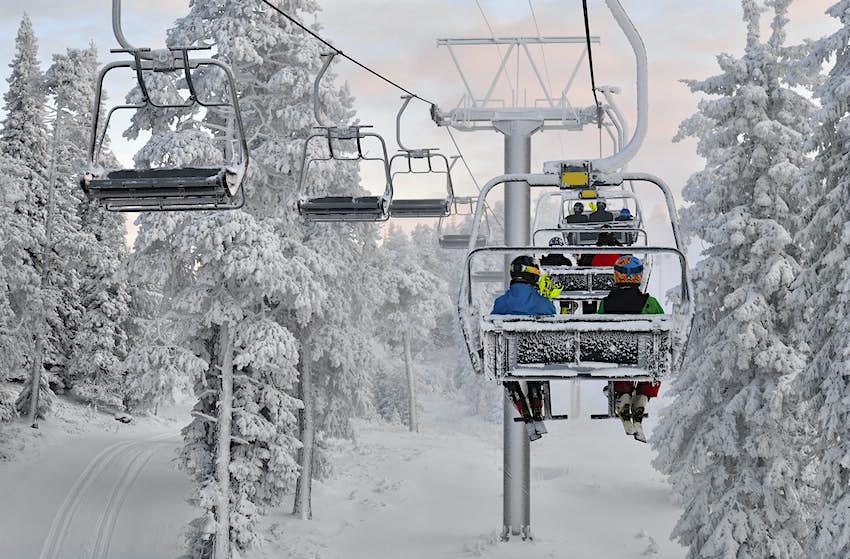 As every skier knows, there’s something more fearsome than even the iciest cliff face: the cost of a ski trip. A week’s lift pass in major European resorts often approaches the €300 mark, with some rising to even dizzier heights. Add accommodation fees and the breathtaking prices for bog-standard burgers and flat beer is enough to send shivers down your spine.

But it doesn’t have to be this way! We slalomed across the European continent to seek out the snowy grail: well-sized ski areas where a high-season six-day lift pass costs less than €200. These eight wintry wonderlands also offer rewarding wallet-friendly eating and accommodation, plus a dash of cultural intrigue for those all-important rest days.

So let those lingering financial fears melt away and consider hitting the slopes of one of these top budget European ski resorts.

Borovets has been a winter playground since the late 19th century. Hemmed by evergreens, its 58km of mostly blue and red runs weave beneath Bulgaria’s mightiest peak, Mt Musala (2925m), reaching a height of 2560m.

For better or worse, Borovets can be a favorite among snow-bound stag (bachelor party) groups who thunder down Borovets’ pistes before stamping their ski boots in bars and basement clubs. Follow them towards cheap beers, but beware drinks promos involving rakia (potent fruit-based firewater). Budget accommodation often involves boxy hotels, but it’s hard to fault a week’s stay in a comfy double room for around €300. In fact, with amenities so affordable, most find the true cost of Borovets to be a numb backside from the army of drag lifts – a relatively small price to pay for quality cheap skiing.

Beneath Slovenia’s mythic Mt Triglav, believed by early slavs to be the home of a triple-headed deity, lies low-key Vogel Ski Resort. With 22km of blue (beginner) and red pistes, it’s hardly one of Europe’s big boys, nor is it reliably snow-sure: but Vogel’s a bargain, with unforgettable views of the Julian Alps.

Some guesthouses shutter their doors for winter, but nightly rates in Ukanc, downhill of the ski lifts, skirt around a budget-friendly €50 per double (with more options in Ribčev Laz). After arrival, transport costs zilch if your guesthouse has signed up to the bus scheme across Bohinj valley. Also free are beauty spots within close driving distance: Lake Bohinj (40 minutes) and ethereal Lake Bled (one hour), looking all the prettier under a dusting of snow.

Sprawling across the France-Italy border, the gargantuan 440km Via Lattea (Milky Way) ski area has sheltered, tree-lined runs galore. The lion’s share is on the Italian side, easily reached from Sauze d'Oulx. With two-thirds of pisted areas rated red (intermediate), this is primo terrain for intermediate skiers; and in a resort of this size, there’s always somewhere to see off the crowds.

Despite being a well-oiled machine of the winter sports industry, the core of Sauze d'Oulx village has kept its charm: cobblestoned and lined with trattories pouring out Piedmont wine to accompany polenta with rabbit, deep-fried vegetables and other northern Italian fare. Self-catering apartments offer the best value, with week-long stays close to Clotes chair lift costing less than €600.

Like this? Try this: Over my head: Going to the backcountry for a first skiing experience

Slovakia’s largest ski resort has high peaks and low prices. Jasná is a 49km spider’s web of pistes astride Mt Chopok (2024m), with around 20 speedy lifts, snow-making across more than half its area, a freeride zone and night skiing.

Like this? Try this: Val d'Isère: Europe's best destination for spring skiing?

Jasná’s also at the heart of Slovak highland culture, which means fireside yarns about folk heroes accompanied by hearty shepherd cuisine. The latter adapts well to the budget skier’s table: a whopping serve of national dish bryndzové halušky (gnocchi-sized dumplings with sheep’s cheese and bacon) leaves enough change from a €10 note for a couple of Zlatý Bažant beers. For more mountain magic, Vlkolínec is only 45 minutes away, a fairy-tale 14th-century hamlet roosting on a hillside.

Boí–Taüll towers at 2020m... and that’s its lowest point. Some of the Pyrenees’ highest pistes are here, draped across a resort that’s crowd-free, family friendly and north-facing – crucial for long-lasting snow. Move fast to secure an apartment or hostal (guesthouse) for less than €450 a week.

Like this? Try this: Budget skiing: save money on the piste

Once you’re in, this is a sweet ski area with 45km of mostly red and black (advanced) trails. Off the slopes, Catalan warmers like spiced snails and trinxat (potato-cabbage hash) fend off the cold, while a chocolate-oozing crepe from Ca la Pepa makes for a delectable low-cost desert. The region’s architectural riches also buoy the selection of budget apres-ski activities on offer, with visitors able to spend lazy afternoons ogling world-famous frescoes in the Vall de Boí’s nine Unesco-listed Romanesque churches.

Private rooms, often dressed with wood-carved furniture and grandmotherly lace, are a snip at around PLN170 (€40), usually including a monster breakfast. Speaking of traditional food, pierogi (dumplings) and żurek (sour soup) cost less than PLN15 (€3.50), and shots of Żubrówka (bisongrass-infused rye vodka) are generously free-poured. Less likely to impede the following morning’s skiing is Terma Bania, toasty-warm outdoor bathing with views of the Tatras.

Compared to expansive resorts in neighboring Austria, 31km Sudelfeld–Bayrischzell is modest – but so are its prices. A week’s stay in a snug guesthouse will set you back €500 per week (a significant saving on the big-name cross-border resorts) while still granting access to a swathe of exciting red runs and a freeride area that’s ideal for experienced riders. Those wanting to slash costs further can opt for dormitory-style accommodation, such as that found at Jugendherberge, where bed and breakfast comes in at an incredible €24.40 a night.

Meaty Bavarian dishes aren’t always cheap, but low-cost mainstays like currywurst and flammkuchen (baked flat-breads slathered in sour cream and onions) mean funds can be reserved for sampling a stein or two of Weissbier; the frothy white head of which the resort’s slopes resemble throughout the season thanks to extensive use of snow cannons.

Who needs Val d’Isère’s glamorous ski scene when the French Alps can be yours for a très petit price tag? The five villages of Val Cenis access 125km of velvety trails. Beginners can roam far, with blue runs extending from village level to top of the resort – a sky-scraping 2800m in altitude – plus there are abundant red and a handful of black runs.

Apartments that sleep four to six people regularly go for €450 per week; per person, those are hostel rates for a balcony view of the Alps. You’re also a mere schuss from the Italian border, meaning authentic pizza at moderate prices – what more could you ask for?

This article was originally published in December 2018. It was updated September 2020.

17 free things to do in Atlanta

When to visit Atlanta

The 25 best hikes in Oregon

13 min read • Published about 4 hours ago