Utah is known around the globe for its five national parks, dubbed the "Mighty 5." But some are better than others, depending on how you travel. Before booking your next adventure to red rock country, here’s what you need to know.

No state comes close to Utah in terms of highest concentration of national parks. Although California and Alaska are each home to more, those parks are spread out across two massively-sized states. Utah’s five parks, however, are all located within a few hours' drive of each other.

What’s more, all five crack the top 20 most-visited national parks, according to the latest figures. They're that good. Be warned, though: as the pandemic drags on and Americans continue to flock to national parks, Utah’s parks are expected to be even busier this summer.

While all five parks are worth your time and can be conveniently paired with each other in one long road trip, here’s where to focus your attention.

Editor's note: during COVID-19 there are restrictions on travel and opening hours may vary. Check the latest guidance in Utah before planning a trip, and always follow local health advice.

You’ve probably seen this park already on a Utah license plate or in an advertisement promoting the state’s great outdoors. Which is fitting because Arches is easily the most drivable, paved park of the five. Even the drive to the top of the plateau where the famous Arches exist is a dramatic entrance. Once inside, visitors can get to nearly every top spot right from the singular scenic drive – oftentimes right from the multiple parking lots that dot the drive.

Visiting Arches: Arches is best-visited from nearby Moab, just a ten-minute drive south. Here there are plenty of hotels, restaurants and tour operators to help you get the most of the area. While in the park, highlights include the scenic drive, hiking Delicate Arch, Devil’s Garden, and Fiery Furnace (currently closed for COVID). Other points of interest include walking Park Avenue, seeing Double Arch, and watching climbers scale Balancing Rock.

The smallest national park in Utah is also probably it’s most visually appealing. Thanks to the thousands of rock spires (called “hoodoos”) that stretch skyward from the canyon floor, the park landscapes can almost seem alive at times, if not extraterrestrial. That’s because Bryce’s intimate and stunning good looks are often compared to something you would expect from planet Mars. Highlights include hiking down into the Navajo And Queen’s Garden Loop, the Sunset to Sunrise rim trail, and seeing the canyon up close on a full moon night.

Visiting Bryce: Unlike Arches, Bryce isn’t near a big tourist town so amenities are limited. There are, however, a few hotels and restaurants just outside the entrance or in nearby Tropic just east of the park. Given its small size, you can see and hike almost everything in a few days. Bryce is often paired with a trip to either Zion National Park or Capitol Reef National Park, which are no more than an hour or two away along the Utah 12 Scenic Byway.

First things first—Canyonlands is really three national parks (or “districts”) rolled into one: Island in the Sky (most popular), The Needles (two hours away), and The Maze (one of the most remote national park areas in the country – 4x4 only with no roads). Because of this, Canyonlands is also huge and easily the biggest and least-visited national park in Utah. Nevertheless, all three districts are known for their off-roading appeal; Island in the Sky is popular among mountain bikers, too.

Visiting Canyonlands: The Canyonlands Visitor Center located in the Island in the Sky district is located about an hour west from Moab. Highlights include the amazing Green River Overlook, Landscape Arch, and biking or off-roading along the insane switchbacks of the Shafer Trail, White Rim Trail, and/or Dead Horse Point. Hell’s Revenge and Elephant Hill are also popular off-roading trails and two of the most difficult in the world.

While all five of Utah’s national parks are especially photogenic, if you want to go somewhere that hasn’t been photographed as much as the others, Capitol Reef is the place for you. In fact, many Utah photography professors take their students here in hopes of capturing something new over the same postcard shots found elsewhere. When coupled with its fruit farms, green valleys, and high canyon walls, this makes for a truly “hidden gem” in Utah.

Visiting Capitol Reef: At just five minutes away, the town of Torrey is the best home base when visiting Capitol Reef. Highlights include the scenic drive, canyoneering Sulphur Creek, and hiking Hickman Bridge, Cassidy Arch, and Grand Wash. If you have an off-road vehicle, Cathedral Valley is as good as anything you’ll find in Canyonlands.

There’s not a bad Utah park to hike in, but if you want the best of the best hikes, Zion takes the top spot. Want proof? Several years ago, National Geographic ranked what they believed were the ten greatest day hikes in the entire world. Amazingly, two of the ten were found in this very park: the Narrows and Angel’s Landing. The first is either a single or multi-day hike through narrow canyons walls in the refreshing virgin river. The latter is a nearly 5.5-mile trek over a precipitous trail that's at times no wider than 5ft – earning its status as one of the most dangerous but awe-inspiring hikes in all of the national parks.

Visiting Zion: Springdale, Utah, is the most popular landing spot. Keep in mind: as Utah’s busiest national park (and third busiest in the nation), Zion campgrounds and hotels fill up fast. Highlights include the aforementioned Narrows and Angel’s Landing, in addition to hiking the Subway, or the Watchman Trail, Observation Point, or Zion Canyon Overlook if you can’t stomach Angel’s.

Get more travel inspiration, tips and exclusive offers sent straight to your inbox with our newsletter.

This article was first published February 2019 and updated March 2022 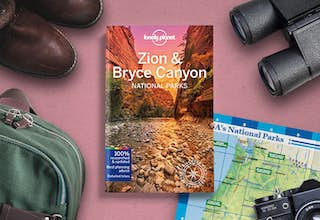 Lonely Planet’s Zion & Bryce Canyon National Parks is your passport to the most relevant, up-to-date advice on what to see and skip, and what hidden discoveries await you. Climb to Angels Landing, drive Hwy 12, and hike the Narrows; all with your trusted travel companion.