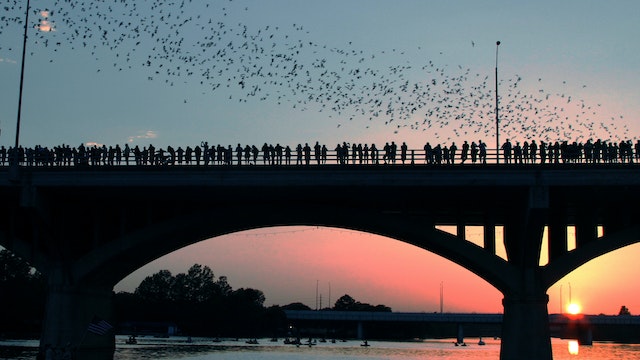 Austin is known as the capital of Texas quirk, so it shouldn't be surprising that it's a city tradition to sit on the grassy banks of Lady Bird Lake and watch the bats swarm out as dusk approaches each evening. Every year up to 1.5 million Mexican free-tailed bats make their home upon a platform beneath the Congress Ave Bridge, which crosses the Colorado at the southern end of downtown.

North America’s largest urban bat colony consists entirely of female and young animals. In June, each female gives birth to one pup, and such is the density as the families take to the skies that bat radars have detected bat columns up to 10,000 feet (3050m) high. Each night, they feed on an estimated 30,000lb (13,500kg) of insects as the colony emerges toward the east like a fast-moving, black, chittering river.

How to see Austin's bats

The Austin American-Statesman’s Bat Observation Area on the southeast side of Congress Avenue is accessible for visitors with disabilities, and is free to enjoy. You will, however, have to pay for parking nearby. The Bat Observation Area includes educational kiosks that operate year round, and Bat Conservation International has volunteers on hand and holds programs on weekend evenings during prime bat-viewing season from May through September. The best bat viewing is in August. You can also call the city's Bat Hotline at (512) 327-9721 to get the most up-to-date information on when the bats have been making their nightly appearances.

In addition to using the Bat Observation Area, people also line up on the narrow sidewalks of the bridge itself, as well as on the grassy hills around the base of the bridge. Lone Star Riverboats and Capital Cruises, behind the Hyatt Hotel, offer bat-watching excursions that run $12 for adults and $7 for kids. Capital also offers guided kayak tours for $30. If you have your own SUP or kayak, you can put in at a number of different points along Ladybird Lake, whether you want to start close to the bridge or a little further away like at Zilker Park.