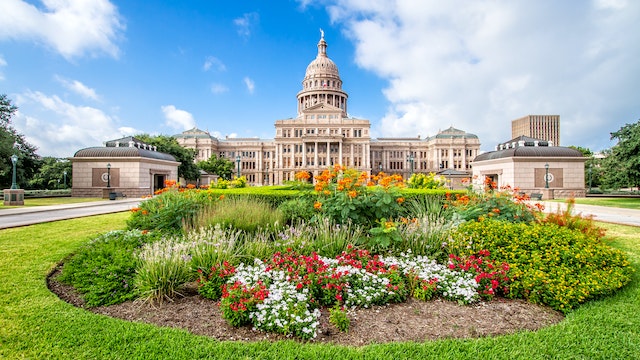 Completed in 1888 using sunset-red granite, Texas’ state capitol is the largest in the US, backing up the familiar claim that everything’s bigger hereabouts. Tasked with creating a bigger space for the state government after it outgrew the original capitol building, architect Elijah E. Myers submitted his design in 1881. It was his second time designing such an edifice after making a name for himself on the Michigan State Capitol Building in Detroit. However, the building that stands today reflects some changes to Myers design made after he was fired from the project in 1886.

The Capitol narrowly survived a 1983 fire, resulting in numerous renovations and restorations over the next decade. It was added to the National Register of Historic Places in 1970 and designated a National Historic Landmark in 1986. Drop in even if only to take a peek at the historic portraiture and the lovely rotunda – look up at the dome – and try out the whispering gallery created by its curved ceiling.

The green sprawl of the capitol grounds and its monuments (which controversially still include a number of Confederate tributes) are worth a stroll. The freestanding visitor center holds an exhibit about the capitol building, while the gift shop sells Texas-themed souvenirs. Self-guided-tour brochures for both building and grounds can be picked up from a ground-floor office that’s also the starting point for an interesting array of daily 40-minute guided tours.

Want to see government in action? Take a seat in the 3rd-floor visitors balconies overlooking the House of Representatives and Senate chamber galleries, which are open to the public when the state legislature is in session (odd-numbered years from mid-January through May or June).