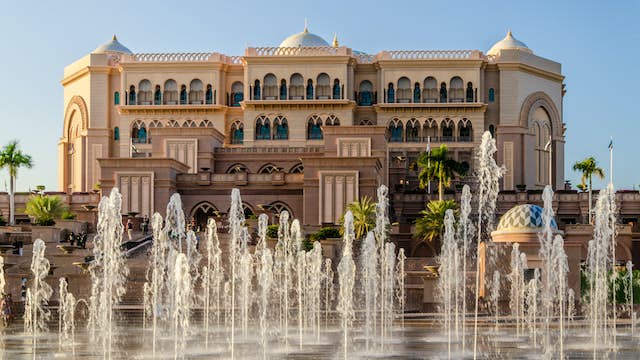 What the Burj Khalifa in Dubai is to the vertical, the Emirates Palace is to the horizontal, with audacious domed gatehouses and flying ramps to the foyer, 114 domes and a 1.3km private beach. Built for Dhs11 billion, this is the big hotel in the Gulf, with 1002 crystal chandeliers and 392 luxury rooms and suites. You don't have to check-in to check out the Emirates Palace, as it doubles as a cultural hub of the city.

Hosting opera and renowned orchestras during the Abu Dhabi Classics concert season, the Emirates Palace has played its part in the cultural expansion of the capital. Other reasons to pop in include ever-popular afternoon high tea in the foyer (from Dhs387 for two people), cocktails at the trendy Hakkasan, fine seafood at Sayad and upmarket Emirati cuisine at Mezlai.