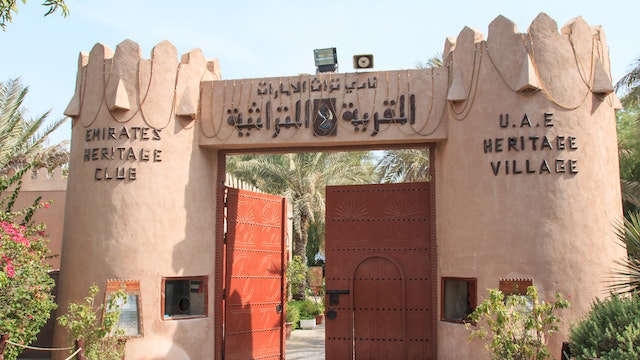 Although looking a bit worn and tired, this reconstructed village is one of the few places to get an insight into the pre-oil era of the United Arab Emirates. The walled complex includes all the main elements of traditional Gulf life: a fort to repel invaders from the sea, a souq to trade goats for dates with friendly neighbours and a mosque as a reminder of the central part that Islam plays in daily life.

Take a look at the barasti (traditional Gulf method of building palm-leaf houses and the name of the house itself) house, designed to catch the breeze through the palm frond uprights, an ox-drawn well without which settled life was impossible, and the ancient falaj (irrigation channel) system, which still waters the crops (note the stones for diverting the water) in the plantations of Al Ain and Liwa Oasis today.

Most Emiratis proudly claim desert descent, and while the nomadic life has largely disappeared from the UAE, many locals still like to return to their roots by camping in goat-hair tents similar to the ones on display in the Bedouin part of the village. Camels continue to play their role in the country's identity, with many families owning a few in desert farms and attending regular races. Little surprise, then, that this is the section that always attracts the biggest interest from visiting Emiratis.

Spare some time to watch craftsmen at work in various labours at the tannery, pottery and glass-blowing workshop. At the swordsmiths, you can see craftsmen honing the blades of khanjar, a traditional curved dagger, which remain an important part of ceremonial costume across the region.

Finally pop into the museum in the old fort with its traditional wind tower for cooling the interior. There are good displays of jewellery here and the paraphernalia of the pearl-diving industry, upon which Abu Dhabi was founded before cultured pearls from Japan and the discovery of oil made pearling redundant. Behind here is a narrow strip of beach with a couple of traditional dhow hulls sitting in the sand and good views of the city skyline opposite.