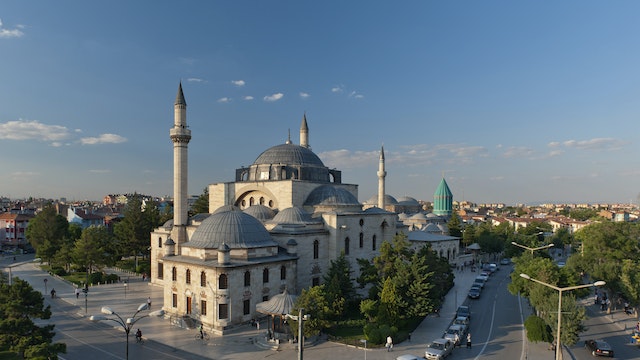 For Muslims and non-Muslims alike, the main reason to come to Konya is to visit this former lodge of the whirling dervishes and home to the tomb of Celaleddin Rumi (later known as Mevlâna), who we have to thank for giving the world the whirling dervishes. This is one of the biggest pilgrimage centres in Turkey, and the building's fluted dome of turquoise tiles is one of Turkey's most distinctive sights.

For Muslims, this is a very holy place, and more than 1.5 million people visit it a year, most of them Turkish. You will see many people praying for Rumi's help. When entering the mausoleum everyone must wear the plastic shoe-coverings provided, women should cover their head and no one should wear singlets or shorts.

After walking through a pretty garden you pass through the Dervişan Kapısı (Gate of the Dervishes) and enter a courtyard with an ablutions fountain in the centre.

At the entrance to the mausoleum, the Ottoman silver door bears the inscription, 'Those who enter here incomplete will come out perfect'. Once inside the mausoleum, look out for the big bronze Nisan tası (April bowl) on the left. April rainwater, vital to the farmers of this region, is still considered sacred and was collected in this 13th-century bowl. The tip of Mevlâna's turban was dipped in the water and offered to those in need of healing. Also on the left are six sarcophagi belonging to Bahaeddin Veled's supporters who followed him from Afghanistan.

Continue through to the part of the room directly under the fluted dome. Here you can see Mevlâna's Tomb (the largest), flanked by that of his son Sultan Veled and those of other eminent dervishes. They are all covered in velvet shrouds heavy with gold embroidery, but those of Mevlâna and Veled bear huge turbans, symbols of spiritual authority; the number of wraps denotes the level of spiritual importance. Bahaeddin Veled's wooden tomb stands on one end, leading devotees to say Mevlâna was so holy that even his father stands to show respect. There are 66 sarcophagi on the platform, not all visible.

Mevlâna's tomb dates from Seljuk times. The mosque and semahane, the hall where whirling ceremonies were held, were added later by Ottoman sultans (Mehmet the Conqueror was a Mevlevi adherent and Süleyman the Magnificent made charitable donations to the order). Selim I, conqueror of Egypt, donated the Mamluk crystal lamps.

The semahane to the left of the sepulchral chamber contains exhibits such as the original copy of the Mathnawi, Mevlâna's cape and other clothing, a 9th-century gazelle-skin Christian manuscript and a copy of the Koran so tiny that its author went blind writing it. In the middle of the room is a display case holding a casket that contains strands of Mohammed's beard. The small mosque in front of the semahane is reserved for prayers but as you exit the building, look to the left of the mihrab for a seccade (prayer carpet) bearing a picture of the Kaaba at Mecca. Made in Iran of silk and wool, it's extremely fine, with some three million knots (144 per sq cm).

The matbah (kitchen) of the lodge is in the southwest corner of the courtyard. It is decorated as it would have been in Mevlâna's day, with mannequins dressed as dervishes. Look out for the wooden practice board, used by novice dervishes to learn to whirl. The dervish cells (where the dervishes lived) run along the northern and western sides of the courtyard. Inside the cells are a host of ethnographic displays relating to dervish life. In particular, one room contains personal items belonging to Şems of Tabriz including his hat and a manuscript of the Mâkâlât, his most famous work.

The complex can get oppressively busy, and seeing any of the contents of the museum display cases can be a pushing and shoving, head-ducking affair. Come early on a weekday if you want to see all the items in peace. On the other hand, the atmosphere on busy days is almost addictive and more than makes up for not being able to properly examine the museum pieces.

Beside the museum is the Selimiye Cami.