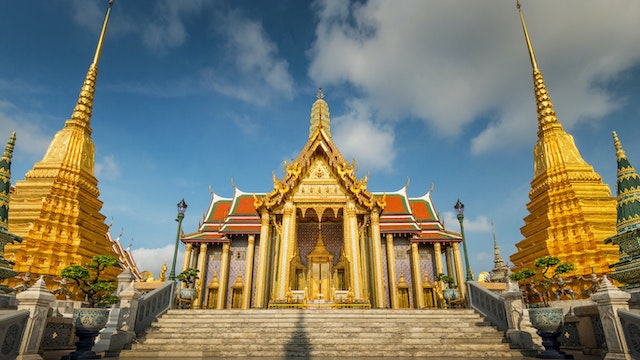 Architecturally fantastic, the Wat Phra Kaew temple complex is also the spiritual core of Thai Buddhism and the monarchy, symbolically united in what is the country’s most holy image, the Emerald Buddha. Attached to the temple complex is the Grand Palace, the former royal residence, once a sealed city of intricate ritual and social stratification.

The ground was consecrated in 1782, the first year of Bangkok rule, and is today Bangkok’s biggest tourist attraction and a pilgrimage destination for devout Buddhists.

Upon entering Wat Phra Kaew you’ll meet the yaksha, brawny guardian giants from the Ramakian (the Thai version of the Indian epic, Ramayana). Beyond them is a courtyard where the central bòht (ordination hall) houses the Emerald Buddha.

The spectacular ornamentation inside and out does an excellent job of distracting first-time visitors from paying their respects to the image. Here’s why: the Emerald Buddha is only 66cm tall and sits so high above worshippers in the main temple building that the gilded shrine is more striking than the small figure it cradles.

No one knows exactly where it comes from or who sculpted it, but it first appeared on record in 15th-century Chiang Rai in northern Thailand. Stylistically it seems to belong to Thai artistic periods of the 13th to 14th centuries.

Because of its royal status, the Emerald Buddha is ceremoniously draped in monastic robes. There are now three royal robes: for the hot, rainy and cool seasons. The three robes are still solemnly changed by the king at the beginning of each season.

Outside the main bòht is a stone statue of the Chinese goddess of mercy, Kuan Im, and nearby are two cow figures, representing the year of Rama I’s birth. In the 2km-long cloister that defines the perimeter of the complex are 178 murals depicting the Ramakian in its entirety, beginning at the north gate and moving clockwise around the compound.

The story begins with the hero, Rama (the green-faced character), and his bride, Sita (the beautiful topless maiden). The young couple is banished to the forest, along with Rama’s brother. In this pastoral setting, the evil king Ravana (the character with many arms and faces) disguises himself as a hermit in order to kidnap Sita.

Rama joins forces with Hanuman, the monkey king (depicted as the white monkey), to attack Ravana and rescue Sita. Although Rama has the pedigree, Hanuman is the unsung hero. He is loyal, fierce and clever. En route to the final fairy-tale ending, great battles and schemes of trickery ensue until Ravana is finally killed. After withstanding a loyalty test of fire, Sita and Rama are triumphantly reunited.

If the temple grounds seem overrun by tourists, the mural area is usually mercifully quiet and shady.

Commissioned by Rama I, this structure was built for the storage of sacred Buddhist manuscripts. The seven-tiered roof, floor woven from strands of silver, and intricate mother-of-pearl door panels make it among the world's most decadent libraries. The interior of Phra Mondop is closed to the public.

Phra Mondop, along with the neighbouring Khmer-style peak of the Prasat Phra Thep Bidon and the gilded Phra Si Ratana chedi (stupa), are the tallest structures in the compound.

Established in 1782 by King Rama I, Wat Phra Kaew was built specifically to house the Emerald Buddha, which he had brought back to Thailand after he captured Vientiane (now in Laos). The Emerald Buddha was placed in the completed temple in 1784.

Phra Ubosot (The Chapel of the Emerald Buddha) which was commissioned by King Rama I is styled in Ayudhaya-period Thai architecture, with a decorative, multi-tiered Lamyong roof structure and double sacred boundary stones.

As one of Bangkok’s most sacred places, visitors should dress appropriately when visiting both Wat Phra Kaew and the Grand Palace. You won’t be allowed to enter unless you’re well covered. Shorts, sleeveless shirts, spaghetti-strap tops, cropped pants – basically anything that reveals more than your lower arms and head – are not allowed.

Those who don't meed the dress code can expect to be shown into a dressing room and issued with a sarong before being allowed in – this adds to queuing and unnecessary delays.

Located along Th Na Phra Lan, in the historic Phra Nakhon District of Bangkok, the entrance to Wat Phra Kaew and the Grand Palace complex is through the clearly marked third gate from Tha Chang river pier.

Open daily 8;30am-3:30pm, admission is free for Thais and costs 500B for everyone else. Admission the Grand Palace is included in the ticket price.