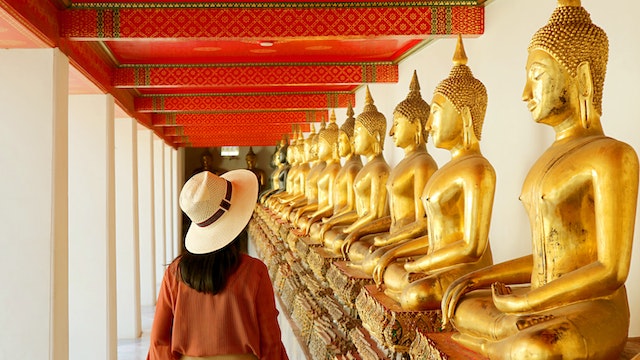 Wat Pho is our absolute favorite among Bangkok's biggest sights. In fact, the compound incorporates a host of superlatives: the city's largest reclining Buddha, the largest collection of Buddha images in Thailand and the country's earliest center for public education.

Almost too big for its shelter is Wat Pho's highlight, the genuinely impressive Reclining Buddha, housed in a pavilion on the western edge of the temple complex. You'll even find (slightly) fewer tourists here than at neighboring Wat Phra Kaew.

The rambling grounds of Wat Pho cover eight hectares, with the major tourist sites occupying the northern side of Th Chetuphon and the monastic facilities found on the southern side. The temple compound is also the national headquarters for the teaching and preservation of traditional Thai medicine, including Thai massage, a mandate legislated by Rama III when the tradition was in danger of extinction. The famous massage school has two massage pavilions located within the temple area and additional rooms within the training facility outside the temple.

A common public ritual at the temple of the Reclining Buddha is to donate coins (representing alms) in a series of metal bowls placed in a long row to the rear of the Buddha statue. If you don't have enough coins on you, an attendant will oblige you with loose change for bigger denominations.

The first iteration of Wat Pho (officially Wat Phra Chetuphon Wimon Mangkhalaram Rajwaramahawihana) was built in the 16th century as a late Ayuthaya-period monastery. Originally known as Wat Phodharam, it was restored in 1788 by King Rama I, who by then had built the Grand Palace next door and established Bangkok as the capital of Thailand.

Much of what visitors see today was completed during the reign of King Rama III who extended much of Wat Pho in 1832, particularly the South Vihara and the West Vihara, where the Reclining Buddha is housed. The Reclining Buddha was completed in 1848 and remains the largest in Bangkok. The figure itself is modelled out of plaster around a brick core and is finished in gold leaf.

It was King Rama III who also turned Wat Pho into Bangkok’s first public university too. The compound’s array of sculptures and artwork, which include more than 1000 depictions of Buddha, were commissioned to help people learn about history, literature and Buddhism.

Between 1831 and 1841, some 1431 stone inscriptions were added by King Rama III and Thai scholars to preserve cultural heritage, including Thai massages, which is why Wat Pho remains the national headquarters for the teaching of traditional Thai medicine. The compound was last restored ahead of the Bangkok Bicentennial Celebration in 1982.

Wat Pho is open daily from 8:30am-6:30pm and entry tickets cost 200B. Your admission includes a complimentary bottle of water (trust us: you'll need it) that can be collected at a stall near the Reclining Buddha temple.

Dress in long skirts/trousers and sleeved shirts when you visit. Shoes must be taken off to enter the temple. You'll be given a plastic bag at the entrance, in which you can wrap your shoes and carry them with you during your visit. Once outside, deposit the (reusable) bags in a collection vat.

There aren’t many sacred religious sights in the world where you can get a massage, but Wat Pho is certainly one of them. As the national headquarters for the teaching of traditional Thai medicine, the school has two Thai massage pavilions located within the temple compound and additional rooms within a training facility outside the temple, providing a unique opportunity to combine relaxation with sightseeing.

Both Thai massage and foot massages are available onsite (30 or 60 minutes) and need to be booked ahead via the Wat Pho Massage website. You can also learn how to give a Thai massage with one-day courses at the Wat Pho Thai Traditional Massage School. Prices start from 12,000B and the courses are available every day expect Sundays. The school is outside the temple compound in a restored Bangkok shophouse in Soi Phen Phat. Other basic courses offer 30 hours spread over five days and cover either general massage or foot massage.

Located in the compound's main wí·hăhn (sanctuary), the genuinely impressive Reclining Buddha, 46m long and 15m high, illustrates the passing of the Buddha into nirvana (i.e. the Buddha's death). Mother-of-pearl inlay ornaments the feet, displaying the 108 different lák·sà·nà (characteristics) of a Buddha. Continuing the numerical theme, behind the statue are 108 bronze monk bowls; for 20B you can buy 108 coins, each of which is dropped in a bowl for good luck and as a gesture of giving alms.

Though built during the reign of Rama I (reigned 1782–1809) and influenced by the Ayuthaya school of architecture, the bòht (ordination hall) as it stands today is the result of extensive renovations dating back to the reign of Rama III (reigned 1824–51). Inside you'll find impressive murals and a three-tiered pedestal supporting Phra Buddha Deva Patimakorn, the compound's second-most noteworthy Buddha statue, as well as the ashes of Rama I.

The images on display in the four wí·hăhn surrounding Phra Ubosot are worth investigation. Particularly beautiful are the Phra Chinnarat and Phra Chinnasri Buddhas in the western and southern chapels, both rescued from Sukhothai by relatives of Rama I. The galleries extending between the four structures feature no fewer than 394 gilded Buddha images spanning nearly all schools of traditional Thai craftsmanship, from Lopburi to Ko Ratanakosin.

Encircling Phra Ubosot is a low marble wall with 152 bas-reliefs depicting scenes from the Ramakian, the Thai version of the Ramayana. You’ll recognize some of these figures when you exit the temple past the hawkers with mass-produced rubbings for sale: these are made from cement casts based on Wat Pho’s reliefs.

On the western side of the grounds is a collection of four towering tiled chedi (stupa) commemorating the first four Chakri kings. Note the square bell shape with distinct corners, a signature of Ratanakosin style, and the titles emulating the colors of the Buddhist flag. The middle chedi is dedicated to Rama I and encases Phra Si Sanphet Dayarn, a 16m-high standing Buddha image from Ayuthaya. The compound's 91 smaller chedi include clusters containing the ashes of lesser royal descendants.

Also known as hǒr đrai, and serving as a depository for Buddhist scriptures, the elevated Phra Mondop is guarded by four yaksha (guardian demons). Legend has it that an argument between the four led to the clearing of the area known today as Tha Tien. Just south of the Phra Mondop is the currently reptile-free Crocodile Pond.

Located in the southwestern corner of the compound is Sala Kan Parian, one of the few remaining structures that predates Rama III's extensive 19th-century renovation/expansion of then Wat Pho Tharam. Built in the Ayuthaya style, the structure formerly functioned as the wát's primary bòht, and held the temple compound's primary Buddha statue.

Small Chinese-style rock gardens and hill islands interrupt the compound's numerous tiled courtyards providing shade, greenery and quirky decorations depicting daily life. Keep an eye out for the distinctive rockery festooned with figures of the hermit Khao Mor – who is credited with inventing yoga – in various healing positions. Directly south of the main wí·hăhn is a Bodhi tree (đôn po), grown from a clipping of the original under which the Buddha is said to have attained enlightenment, and also the source of the temple's colloquial name, Wat Pho.

Aside from monks and sightseers, Wat Pho is filled with an altogether stiffer crowd: dozens of giants and figurines carved from granite. The rock giants first arrived in Thailand as ballast aboard Chinese junks and were put to work in Wat Pho (and other wát, including Wat Suthat), guarding the entrances of temple gates and courtyards. Look closely and you’ll see an array of Chinese characters. The giants with bulging eyes and Chinese opera costumes were inspired by warrior noblemen and are called Lan Than. The figure in a straw hat is a farmer, forever interrupted during his day’s work cultivating the fields. And can you recognize the guy in the fedora-like hat with a trimmed beard and moustache? Marco Polo, of course, who introduced such European styles to the Chinese court.

You'd be wise to combine your visit to Wat Pho with lunch, specifically lunch at Pa Aew, an open-air stall that serves tasty Bangkok-style curries and stir-fries.

Alternatively, Tonkin Annam serves some of the best Vietnamese food in Bangkok. Come for the phó (noodle soup), deliciously tart and peppery banana blossom salad, or dishes you won't find elsewhere, such as bánh bèo (steamed cups of rice flour topped with pork), a specialty of Hue.

The almost fairy-tale-like Chakrabongse Villas compound incorporates three sumptuous rooms and four larger suites and villas, some with great river views, all surrounding a still-functioning royal palace dating back to 1908. There’s a pool, jungle-like gardens and an elevated deck for romantic riverside dining.

Else you can walk to Wat Pho from Arun Residence, which is strategically located on the river directly across from Wat Arun. This multilevel wooden house has much more than just great views: The seven rooms here manage to feel both homey and stylish (the best are the top-floor, balcony-equipped suites). There are also inviting communal areas, including a library, rooftop bar and restaurant.